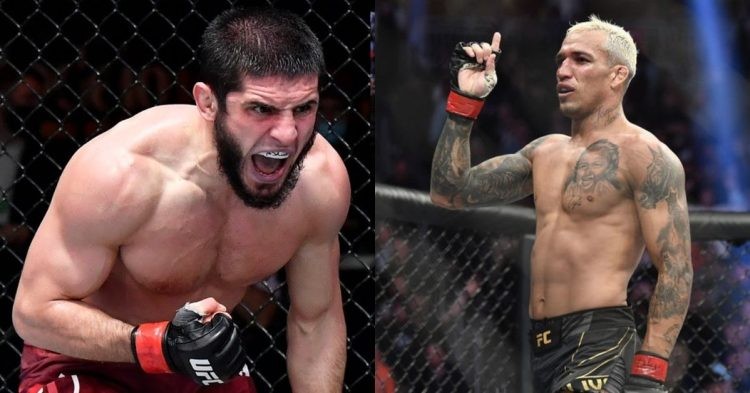 At the UFC 280 event on October 22, Charles Oliveira and Islam Makhachev will square off for the vacant lightweight championship. It will happen at Abu Dhabi’s Etihad Arena.

Oliveira currently has an 11-fight winning run and has a 33-8 career record. Following Khabib Nurmagomedov’s retirement, his latest four victories over Tony Ferguson, Chandler, Poirier, and Gaethje have solidified him as the undisputed lightweight champion.

The most difficult opponent Makhachev has yet to face in the UFC is Oliveira. Only Dan Hooker (No. 13) and Arman Tsarukyan (No. 10) are now listed in the Top 15 of the lightweight division out of the 11 opponents Makhachev has defeated in the UFC.

Before their UFC 280 main event, Makhachev had some speculations about Charles Oliveira.

Makhachev brought up a previous news story in which Oliveira stated that he would travel to Abu Dhabi 20 days prior to the bout in order to get acclimated to the hot heat and unpredictable weather. In doing so, he questioned Oliveira’s continued absence from the nation and even suggested that he would not attend the fight at all.

He took to Twitter and stated, “2 weeks before the fight, Charles and his team not in Abu Dhabi yet., should I start worrying?

2 weeks before the fight, Charles and his team not in Abu Dhabi yet., should I start worry ? 🤔🤔🤔 pic.twitter.com/pyOBMo9D4O

Islam Makhachev is already in Abu Dhabi finishing up his training camp as the October 22nd date for UFC 280 draws near.

Although Makhachev will be competing for the lightweight championship for the first time when he faces former champion Oliveira in the UFC 280 main event, many would argue that Islam’s battle for the title has been long overdue.

Seeing his confidence and such speculations bought many fans with interesting and hilarious reactions. Here are few fan reactions:

“Charles has said numours times that he did not want to fight( scared). Wouldn’t be surprised if he decides to pull out”
“Brother never trust people from favelas, I love you Makhachev.”

Charles Oliveira ever since dyeing his hair blonde. 😂 pic.twitter.com/BymoQbh2o8

These reaction only validates that the fight is highly anticipated and the match up in itself is very intriguing given their fighting styles.

Advice to Average People? Shaquille O’Neal Doesn’t Even Take a Second and Says, “So, I Would Say…”