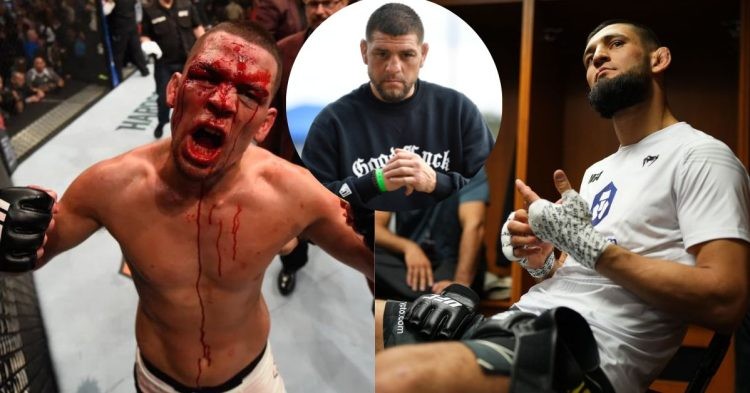 Khamzat Chimaev will face Nate Diaz in the main event of UFC 279. This will be the last fight in Nate’s contract in the promotion. There have been much drama and talks going on regarding this fight recently.

Recently, the UFC 279 news conference was canceled Thursday at MGM Grand Garden Arena after several alleged backstage altercations broke out between multiple fighters on the card and their teams.

As a result, this caused Dana White to cancel the UFC 279 press conference. In a media scrum following the incident, Dana said that the altercations were started by Khamzat Chimaev and Holland, who are not fighting each other Saturday night at UFC 279.

Somehow, Nate Diaz and his team got involved and the incident escalated into a brawl that included bottles and chairs being thrown as per sources. However, none of the fighters required medical attention and as this could lead to something big, White canceled the press conference altogether.

Meanwhile, MMA fans on Twitter had plenty to say about the drama, surrounding the brawl between Khamzat and Team Diaz. One user jokingly wrote:

“Preliminary reports say that Nate and Nick Diaz assaulted Khamzat Chimaev backstage before the UFC 279 press conference. Chimaev is currently unresponsive and is being transported to the hospital. #UFC279.”

#ufc Khamzat Chimaev got knocked out by Nick Diaz, Paramedics escorted him in an ambulance; per sources.

There was no such thing as per the report. However, as fight fans know that wherever Nate Diaz or his big brother Nick goes, almost always something happens. Nate has been responsible for some infamous brawls and backstage fights.

Earlier, Khamzat was very adamant about what is going to happen in the fight and was trash-talking about Team Diaz. This could be the reason behind the altercation. White stated that there will be added security in the official weigh-in for the main event after this.

Khamzat Chimaev is set to meet Nate Diaz in the welterweight main event of UFC 279, which takes place at T-Mobile Arena on Sep, 10. Before the press conference, a massive brawl broke out backstage which included Kevin Holland, Khamzat and his team, and Team Diaz.

Chimaev and Nate were scheduled to have their first ever face-to-face interaction and stare down at the press conference, but UFC President White opted to call things off after the incident. This was expected as there were some shots fired from both the fighters before they came face to face. Chimaev hinted before that he will not back down in case something like this happens.

There is no video footage of the brawl yet, so reports suggesting the whole incident are still unclear. Following the altercation, Khamzat uploaded a video on his social media and said:

Khamzat Chimaev just uploaded this to his Instagram story.

According to White, the Diaz camp showed up with 57 people. On the other hand, Khamzat’s team also had over 30 people. However, Khamzat had an altercation with Kevin first but then the Diaz team arrived at the scene and things got escalated.

Ultimately, this led to the cancellation of the press conference and stare-downs. White promised that there will be more security on the scene the next time Khamzat and Nate meets.