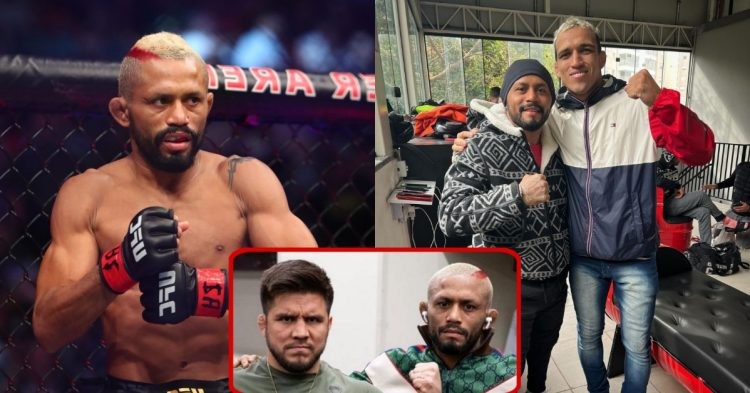 UFC Flyweight Champion Deiveson Figueiredo reportedly training with Charles Oliveira. According to a report, Figueiredo is currently in Brazil to train at Chute Boxe full time, which is Oliveira’s gym.

In his last fight, Deiveson Figueiredo fought Brandon Moreno at the beginning of the year at UFC 270. For that contest, he trained with former UFC double champ Henry Cejudo. The relationship turned out to be extremely beneficial as Figgy took back the 125lbs belt under Cejudo.

Following his stint at Fight Ready, which is the gym that Triple C runs, Figueiredo is now aiming to train alongside his countryman. Charles Oliveira recently offered to train Tony Ferguson following UFC 274. It seems as if Oliveira’s gym is developing a reputation as a good environment for elite fighters to train.

Why did Deiveson Figueiredo opt for Charles Oliveira over Henry Cejudo?

MMA fighters usually train at multiple gyms at the same time. However, this report suggested that Figgy will move to the gym permanently and hold his next fight camp at Chute Boxe. Hence, it seems very clear that the 34-year-old has indeed left Henry Cejudo for good.

Why did he make such a decision? Was there any friction between Cejudo and Deiveson Figueiredo during their time at Fight Ready? There are no reports that suggest that the two had any clash of egos while training together. The scenario that is most likely, is the fact that Deiveson wanted a fresh start ahead of his return to the cage.

Recently another of Cejudo’s former students, Zhang Weili also chose to train at a new gym for her bout at UFC 275. But there was no animosity between them.

Deiveson’s rival, the former champ Brandon Moreno also left his long-time gym to join Jame Krause ahead of his interim title fight with Kai Kara France. So there is a trend of fighters trying to rejuvenate their careers.

Another reason why Figgy may have joined Charles Oliveira is that he has the aspirations to move to bantamweight. Figgy recently expressed that he is aiming for a fight against the 135lbs champion Aljamain Sterling. Hence the Brazilian champ needs to work on his Jui-Jitsu to take on Aljo who is much bigger than him in size.

Fans recently saw that Aljo used his superior BJJ skills to outpoint Petr Yan. Hence, Figgy needs someone with the BJJ credentials that Charles Oliveira has. So it will not be surprising to see the current flyweight champ moving up very soon.

“I’ve Beaten Him in All Matches,”- Nikolay Davydenko Makes Bold Statement on Playing Against Rafael Nadal