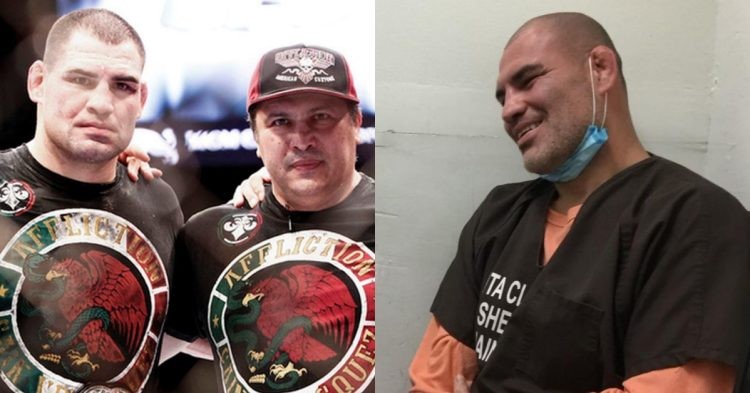 Former two-time UFC heavyweight champ Cain Velasquez was in police custody for the past 8 months. However, that is set to change, as the court grants bail to Velasquez for an amount of $1 million. Although Velasquez is free to go home, he will have to abide by some conditions. Cain has to wear a GPS tracker and he can not be present within 300 yards of the victim in the case.

According to a report from ESPN, the 40-year-old was charged with 10 gun-related charges and attempted murder. On February 28th in San Jose, Cain went after Harry Goulrate and chased Goulrate in a car. He eventually caught up to Harry’s vehicle and fired multiple shots. At the time of the incident, Harry’s stepfather Paul Bender was in his car as well. Paul sustained injuries in his arm.

Known for his calm and cool demeanour, why did Cain Velasquez take such a drastic step? As per reports, Harry Goulrate allegedly molested Cain’s 4-year-old son over “100 times.” Apparently, Harry threatened the child to be quiet about the incident. But not only Cain’s son, Harry allegedly repeated the same with several other children as well. Goulrate is currently facing charges of sexual assault.

But the road to freedom was not an easy one for Velasquez. Judge Shelyna Brown refused to grant him bail 3-times before. However, Judge Arthur Bocanegra finally granted him bail and added, “If you are as devoted a husband and father, I’m confident and have to believe you will not jeopardize anything that would take you away from your son, your daughter, your family. I hope you don’t prove me wrong.” (h/t via MMA Junkie)

Cain Velasquez is a beloved figure in the world of Mixed Martial Arts (MMA). During his 253 days of incarceration, many fighters spoke up and demanded his release. His teammates Daniel Cormier, Khabib Nurmagomedov and Luke Rockhold showed their support for the fighter and prayed for his freedom. UFC President Dana White also made an incredible gesture to strengthen Cain’s case.

Dana wrote to the Santa Clara Superior Court judge and gave a glowing account of Cain’s character. White worked closely with Cain Velasquez for a significant period of his career, hence his words carried a lot of weight. The Judge even referenced the support from the MMA community during his statement. UFC fighters and Cain’s teammates celebrated the news and congratulated him on obtaining bail.

From his teammate and best friend Daniel Cormier to his American Kickboxing Academy head coach Javier Mendez, everybody seemed to be buzzing with excitement.

About time. Congrats to all his family. https://t.co/2fQ3Yhddrm

Velasquez joined UFC in 2008 with a record of 2-0. Upon his debut, Cain went on a 7-fight unbeaten streak which saw him becoming the heavyweight champion by beating Brock Lesnar at UFC 121. Although he lost the belt to Junior dos Santos in the following fight, Cain regained the belt at UFC 155. For a period of time, fans thought Cain was the best heavyweight fighter of all time.

But injuries plagued his career and Valesquez had to walk away from the sport after losing to Francis Ngannou in 2019. He finished with a UFC record of 12-3 and a career record of 14-3 in 17 total fights.