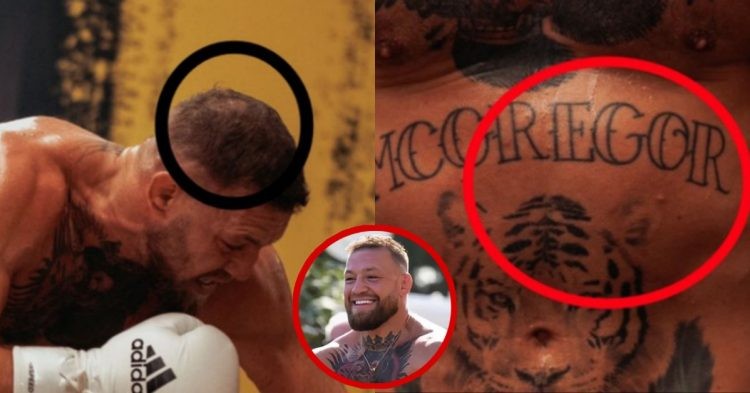 As of July 7, Conor McGregor still doesn’t show any USADA tests in 2022. pic.twitter.com/A1C9j4UM8r

McGregor has been missing from UFC Octagon since July of 2021. In his last fight against Dustin Poirier, The Notorious One suffered a horror injury as he snapped his ankle in the first round of the contest. He went through a complicated surgery last year to repair his injuries.

The trapezius muscle, the most overlooked muscle in all of fighting.
Sign up to @McGregorFast for my trap explosion program. pic.twitter.com/GgdcNOnnT3

The 33-year-old is currently on his way to full fitness ahead of a potential rumour later this year. But one thing that the fans have found unnatural, is his physical transformation. Ever since the surgery, Conor has become much bulkier. But there has been speculation from the fans whether Conor’s muscle gain is completely natural or not.

There are also more pictures than ever circulating of Conor’s supposed side effects. pic.twitter.com/PXT7eiXQw2

Fans have pointed out the bumps on his stomach and his recent hair loss to support their claims. This revelation of Conor not being subjected to a drug test will only add fuel to the fire. Here are some fan reactions to the news.

he’s their last remaining cash cow, they’re probably just letting him do whatever he needs to come back ASAP

Had 1 test in Q4 of 2021 and nothing since then. Just incredible

That boy is juicing HARD rn

Jorge Masvidal recently accused Conor McGregor of being on steroids

Conor McGregor is currently looking for an opponent for his return. Although there were talks of Conor being involved with the vacant lightweight title fight against Charles Oliveira. However, it looks like Islam Makhachev will be the one to get the fight instead. But one fighter who has made it clear that he wants McGregor next is Jorge Masvidal.

In the last months, Jorge Masvidal repeatedly alleged that Conor McGregor is on steroids. He also stated that Conor’s life could be in danger because of drug abuse. However, he failed to present any evidence to support his claims. But now that Conor’s recent drug-testing record is in the public domain, Masvdial’s claims may get some validity behind them.

USADA is yet to come out with an official statement about why there was no testing for Conor throughout 2022. But Conor had a major surgery where he was required to be on a lot of medication. That may have played a role in Conor’s lack of testing.

Why do you think USADA did not conduct any drug tests on Conor McGregor? Do you think Jorge Masvidal is right about Conor being on steroids? Let us know your theories in the comments below.