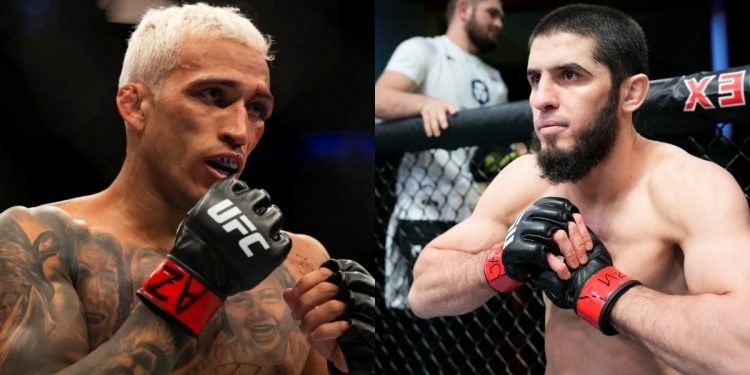 Charles Oliveira vs Islam Makhachev for the vacant lightweight belt at UFC 281? (Images via Twitter)

The Ultimate Fighting Championship (UFC) is reportedly looking to book Charles Oliveira vs Islam Makhachev for UFC 281. The card, set to go down in UAE on October 22nd, needed a big fight as the headliner. Hence, putting fan-favourites Oliveria and Makhachev in the vacant lightweight title bout makes a lot of sense.

But it comes as a surprise to the fans as the company was looking for other opponents for both fighters. Charles Oliveira wanted Conor McGregor as his next opponent, while Islam Makhachev was set to fight Beneil Dariush.

However, the match-up will be welcomed wholeheartedly. Most supporters and pundits wanted these two to fight for the vacant 155lbs title. While Charles Oliveira is on an 11-fight win streak, Islam Makhachev has won 10 fights in a row. At present they are the two most deserving candidates to fight for the belt, as most of the other elite fighters are coming off losses.

Islam Makhachev’s teammate and mentor Khabib Nurmagomedov has been repeatedly asking the UFC to book Makhacehv in a title fight against Oliveira. Not only will The Eagle finally get his wish, but it also looks like his protege will have the home-crowd advantage as well.

For the longest time, the lightweight had the presence of a dominant Dagestani wrestler. Since Khabib’s retirement in 2020, Charles Oliveira has taken over the reigns and has become the person to beat in the division. But Islam Makhachev now has the opportunity to take back the kingdom from the Brazilian fighter.

But the task is not going to be an easy one. Makhachev is yet to across a Brazilian Jui-Jitsu maestro such as Charles Oliveira. On the other hand, Oliveira too is yet to encounter a powerful wrestler such as Islam. So this fight will once again revive the age-old debate of which is superior between wrestling and BJJ.

But the striking may also become a potential determining factor in the bout. Charles has the knack of getting knocked down in every fight that he is in. Hence, Islam’s strong, looping punches may catch Do Bronx off-guard. At the same time, the only loss of Makhachev’s career came via TKO. Hence, Oliveira’s power may also give Islam some problems to deal with.

Regardless of the winner, Charles Oliveira vs Islam Makhachev promises to be an enthralling contest to witness. Who do you think wins at UFC 281? Can Oliveira continue his dream run? Or Makhachev will maintain his dominance and become the new champion? Let us know in the comments section down below.