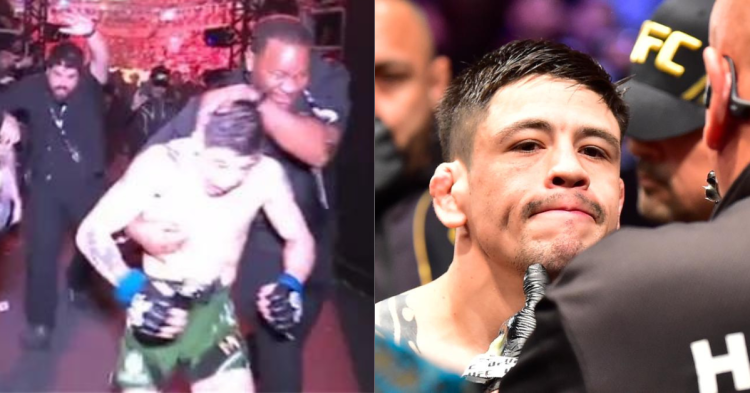 Brandon Moreno being escorted to safety after his win at UFC 283. (Credits: Twitter)

Following his victory over Brazil’s own Deiveson Figueiredo, Brandon Moreno is now the new Flyweight Champion once again. Taking on Figueiredo for the fourth time, Moreno has finally settled the tie at UFC 283.

However, a lot of fans at the Jeunesse Arena were not particularly pleased with Moreno or his victory. Due to, what Deiveson felt, was an eye-poke, the fight was stopped after the doctor deemed the Brazilian not fit to continue. Although Figgy later realized that it was not an eye-poke, the fans were a little less susceptible to it.

As such, ‘The Assassin Baby’ needed to be quickly escorted to safety after exiting the Octagon. Bombarded with drinks and other objects, Moreno scurried backstage with security beside him. For the most part, Brazilian fans have been known to be hostile, however, the manner in which the fight ended likely sent them over the edge.

Coming into the third round, Moreno was leading the scorecards in the closely contested bout. Although Figueiredo made a couple of quick submission attempts, Moreno was able to deal with the danger. Moreover, Moreno out-landed Figueiredo (85-24) and had close to seven minutes of ground control time. Thus, Brandon was looking like the favorite to win the fight.

Realizing that he needed to change his pace, Figueiredo was much more aggressive in Round 3. However, Moreno caught Figueiredo with a big left that cut his left eye. Notably, the follow-up shot seemed to have poked Figueiredo in the eye, which he protested. Moreno ended the round on top and at the end of it, the doctor declared Figueiredo’s eye injury too severe for him to continue.

Naturally, fans watching at home were not pleased with the way that the Brazilian crowd conducted themselves. As such, fighters, fans, and even commentators pointed out their rash behavior in response to Moreno winning the bout.  Let’s take a look at some of the reactions:

My gosh Moreno running and being protected leaving the arena as a lot of things thrown at him by the crowd!! #ufc283

Rio fans showering Moreno on the way out with drinks. Horrible.

That stadium in Brazil cleared out fast af!! They probably chasing @theassassinbaby to the airport 🤣 #UFC283

Moreno is escorted out of the arena by security as the extremely classy crowd throws objects at him. #UFC283

Nothing dirty at all, clean shot by the new champion Brandon Moreno! #UFC283 he really outclassed Figgy tonight. He was cruising

What’s up with the Brazilians.. first they disrespect Brandon Moreno by throwing trash at him and now they clear the arena disrespecting Hill smh!

Let’s be real the fans were trash. First of all a large number were not there until the main card. They threw stuff at Brandon Moreno, a number of them missed Glovers retirement. Then Glover had to walk with Hill so he didn’t have shit thrown at him. Awful #UFC283

Glover Teixeira just an absolute class act, tells the crowd: "I saw you throwing things at the last champion [Brandon Moreno], I'm going to walk back with Jamahal Hill. Respect him" #UFC283

Understandably, the ‘eye poke’ caused a lot of controversy in the fight. However, during the broadcast, the commentators were able to get a second look at the incident while the fight continued. According to Daniel Cormier, Jon Anik, and Co., Moreno’s finger grazed Figueiredo’s eye, but it was the punch (legal) which caused the majority of the damage.

Speaking in the post-fight interview, Figgy admits that it was “Brandon’s night.” For the most part, Figueiredo realized that it was not an eye poke, but hopes that he does not have to deal with any lasting effects moving forward. Following the defeat, Figueiredo will now move up to bantamweight, finishing his saga with Brandon Moreno for good.

As such, Moreno closes out the rivalry with 2 wins over the former flyweight champ. With Figgy out of the equation, there is still a whole list of dangerous fighters waiting for their shot at the title. Thus, Brandon will have to keep on putting up performances like today to establish his legacy as one of the best flyweights ever.

What did you make of the crowd’s behavior towards Moreno? What do you think should be done to prevent it? Leave your thoughts in the comments below.