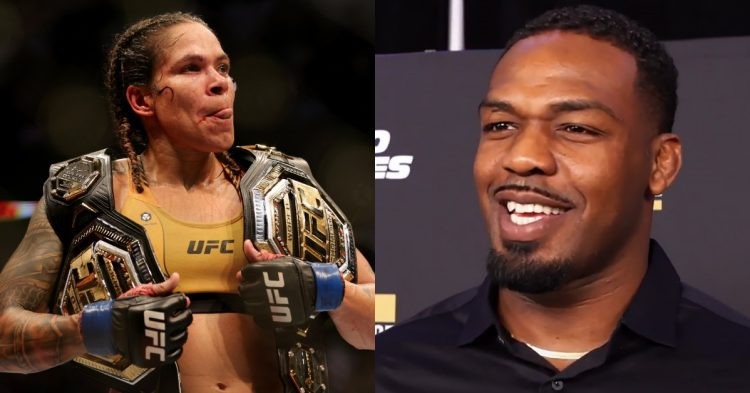 Arguably the greatest male MMA fighter of all time, Jon Jones, congratulates the female GOAT Amanda Nunes. With her historic performance against Julianna Pena at UFC 277, Amanda Nunes has once again become the only active double champ in the UFC right now. However, Nunes has created one more record with her victory.

Amanda Nunes has joined a very elusive club of champions after beating Pena. There were only 4 champions in UFC history to have 10 or more than 10 wins in the title fights. But now, Amanda has joined Jon Jones, Georges St-Pierre, Demetrious Johnson and Anderson Silva as the only fighters to have double-digit wins in UFC championship fights.

Unsurprisingly, Jon Jones leads the list with 14 wins, followed by GSP, Mighty Mouse and Silva who have 13, 12 and 11 wins. Nunes is now fifth on the list with 10 wins. Jon took to Twitter and welcomed Nunes to the club.

Is Amanda Nunes the true GOAT in women’s MMA?

Amanda Nunes’ first loss to Julianna Pena came as an utter shock to MMA fans. Before that loss, Amanda Nunes was almost seen as a superhero who did not have any weaknesses. However, the way she lost the bout, raised a lot of doubt about Nunes’ dedication to the sport. But the manner in which she recaptured the title, reminded the fans why she is an all-time great.

During the second fight, Amanda created a record by knocking down Pena 3 times in the second round. It was the most amount of knockdowns in a single round for a women’s fight in UFC. She also became the only female fighter in the UFC to have a judge score the fight 50-43 in her favour. On top of that, she is now a two-time UFC double champ. So there can be no doubt left about her GOAT status.

There are only a handful of other fighters who are somewhat in the running for the title of the GOAT. Cris Cyborg and Valentina Shevchenko are the only credible candidates left. Although she has beaten Cyborg once, Amanda has two victories over Shevchenko. Her knockout of Cris and her post-fight celebration inside the Octagon has become the stuff of legend.

Ultimately, there is no one who can match her resume in or outside the UFC. Nunes has always taken on the hardest challenge possible and made them look easy. UFC President Dana White also shares the same opinion and called Nunes the undisputed GOAT regardless of the results going forward. Not only the boss, but Nunes also has the seal of approval of the fans too.