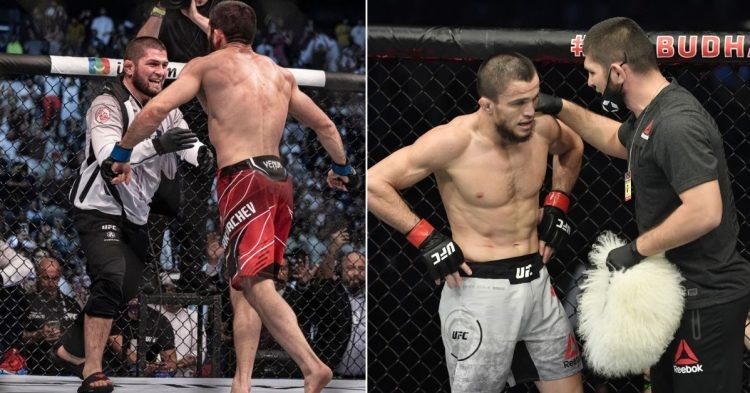 It’s a peculiar case when a fighter becomes bigger than the sport! We have seen this with Conor McGregor, and following closely is none other than Khabib Nurmagomedov. The former UFC Lightweight Champion from Dagestan is a huge face in the world of combat sports. For the Islam world, Khabib is almost synonymous with the UFC. No wonder, his last name “Nurmagomedov” is helping several other fighters get the spotlight. Most importantly the ones with their last name, Nurmagomedov.

Yeah yeah, that’s what we all want. He has 3 fights in the UFC and wants to skip the line. He already got ranked without beating a ranked opponent. He will keep getting preferential treatment because of his last name. https://t.co/mIkwqT4bfQ

Recently, top-ranked Bantamweight contender Ricky Simon accused the UFC of giving preferential treatment. Reacting to a tweet on social media, Simon alleged that Umar Nurmagomedov is already ranked in the top 15 of the division without fighting a ranked opponent. He also alleged that the Dagestani fighter will easily climb the top of the ladder and might skip the line because of his last name.

Recently, Umar Nurmagomedov put out a tweet, taking a dig at fellow Bantamweight fighters for ducking him. “They ran from Khabib, they ran from Islam but they can’t run forever from me.” Umar tweeted.

Ricky Simon got into a Twitter back and forth with Will Harris of the Anatomy of a Fighter, and the duo had some interesting points to make.

You and I know rankings don’t mean anything. The young man wants to fight

I literally said a top opponent to get closer to the belt . I didn’t say a top 5 or a top 2. Bark up @UNmgdv way if you feeling froggy. You got the juice to beat him? Go and get it. That’s a name on your resume anyone should want .

Both Umar and Ricky compete in the UFC’s Bantamweight division. Simon is ranked #11 in the rankings, while Umar sits at the #13 spot. The Dagestani fighter is on a 13-fight win streak, with three straight wins inside the UFC Octagon. Meanwhile, Ricky Simon is on a five-fight winning streak.

Earlier, Charles Oliveira had also claimed Islam Makhachev got the title shot because of Khabib Nurmagomedov, considering he had not beaten anybody in the top 5 of the UFC’s lightweight division. Be that as it may, Makhachev emerged victorious as he beat Do Bronx via submission in the second round to become the new UFC Lightweight Champion.

Will we see a similar outcome in the case of Umar Nurmagomedov? Only time will tell.