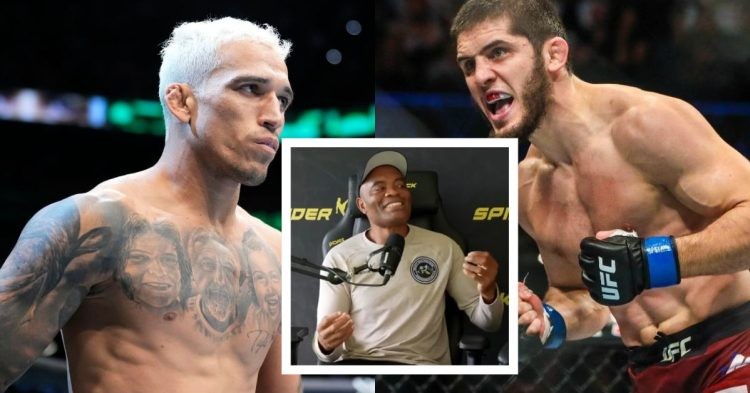 UFC legend Anderson Silva gave his prediction on the title fight between Charles Oliveira and Islam Makhachev. Oliveira and Makhachev will fight for the vacant lightweight title in the main event of UFC 280.

There have been a lot of talks about this much-anticipated fight between two of the best lightweights in the division. While many think that Charles is a lethal force to be dealt with for his striking and submission skills, some think otherwise.

Former UFC lightweight champ Khabib Nurmagomedov sidelined Oliveira’s astounding achievements and skills and stated that Islam will dominate Charles in the fight and take the belt.

In a recent interview with ‘FULL SEND PODCAST’, Silva was asked about his opinion on this fight. Anderson started by making a joke and hinting that Oliveira’s BJJ is very powerful. He said:

“I joke sometimes here in the home when I’m doing something crazy, the kids [says] dad are u crazy? [Anderson replies] no I’m Gracie bro, I’m Gracie, you know…that’s the joke you know because Gracie is about power.”

“Charles Oliveira is an amazing fighter and nobody can talk about him because the kid is doing something very crazy you know.”

When asked who will win the title, Silva said without any hesitation: “Of course Charles ‘do Bronx’ gonna win bro, of course.”

Watch the clip below:

Charles has improved his overall skills over the years and while his submission skill is a danger to anyone, so is Makhachev’s wrestling. This fight will finally settle the debate of who is the best lightweight in the UFC.

Charles Oliveira vs. Islam Makhachev: Who will win the lightweight belt?

Charles Oliveira will take on Islam Makhachev at the main event of UFC 280, in Abu Dhabi, scheduled to take place on October 22, 2022. The Brazilian was stripped of his lightweight title at UFC 274 after he failed to make weight. However, he defeated Justin Gaethje and got back on track to retain the belt.

After Khabib retired, Charles dominated the lightweight division and proved to be a legitimate threat. Charles faced some of the best fighters from the division the likes of Tony Ferguson, Michael Chandler, Dustin Poirier, Justin Gaethje, and many others.

Even though he got hurt in the early rounds, Charles managed to get back up and won all of the fights via stoppages or submissions, except for Ferguson.

On the other hand, Islam is also a high-level fighter who possesses elite wrestling. However, he has yet to face his hardest tests. Makhachev will be putting his 10-fight win streak against Oliveira’s 11-fight win streak.

Both fighters are phenomenal on the ground and feet, however, Oliveira has shown his rock-solid chin and phenomenal striking against the best strikers. The Russian has an incredible domain over wrestling, which is the main part of his game, just like Khabib.

However, one cannot be too sure who will win based on the stats. But, it seems Oliveira is more of a complete fighter and he poses a greater threat to Islam because of his ground game and willingness to trade shots on feet.