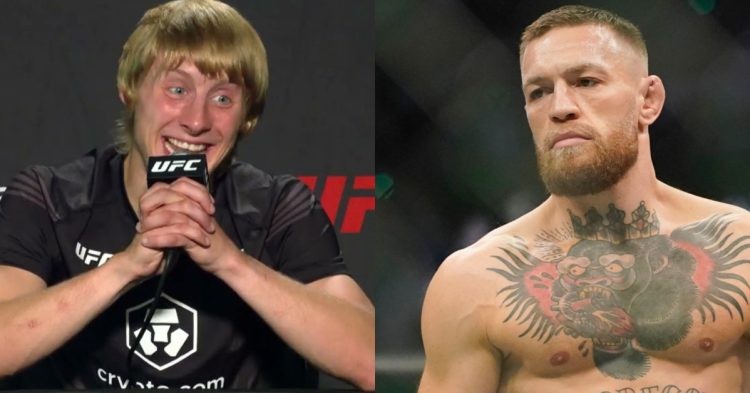 Paddy Pimblett is perhaps the biggest UFC star in the United Kingdom currently, right behind the Welterweight champ Leon Edwards. However, that will certainly change as Pimblett moves up the ranks.

However, Paddy just does not want to be a star. He wants to become the biggest draw in the history of the company. At the moment, Conor McGregor is the most bankable star that UFC has. Every time there is a McGregor show in town, it is almost guaranteed to be the most talked about event. Although the recent losses may have dampened it slightly, he is still the biggest star in the UFC.

Previously, The Baddy stated that he would like to fight against Conor and it’d do massive business. However, in a recent interview with Steve-O, Pimblett stated that his potential fight against McGregor will be the most-sold PPV event in the promotion’s history.

“You never know, down the line me and him could end up fighting… It’s a possibility [if he] comes back down to 155 pounds. That would be the biggest pay-per-view in the history of the UFC.” (h/t via MMA Mania)

The UFC 229 showdown between Conor McGregor and Khabib Nurmagomedov is the biggest UFC PPV event. It has sold 2.4 million PPVs in 2018. But Paddy believes that his fight against Conor may out-sell that particular event.

Paddy Pimblett is already a big star in the UFC

Paddy Pimblett’s last two fights took place in his home country England. He competed in both of the last two ‘UFC London’ cards this year. Although he did not feature in the main event or the co-main, Paddy was the most-talked-about fighter on both occasions. Especially after his last fight against Jordan Leavitt, Pimblett featured in all the headlines.

He also gained mainstream attention as well after speaking passionately about mental health issues for men. After a friend of his died by suicide, Paddy gave an inspiring speech after beating Jordan Leavitt. It also earned him a lot of respect for spreading the word on mental health issues. His passion, his charisma and his charm set him apart from other fighters in the promotion.

All the interviews featuring him do the biggest number on social media. On top of that, he signed a seven-figure contract with Barstool Sports which earns him more than his current fight purses. Pimblett himself stated in interviews that he will only fight in PPVs going forward as UFC values him too much to put him on Fight Night cards.

So, a fight between Conor McGregor and Paddy Pimblett is not an impossible idea. Conor is currently ranked 11th in the lightweight division and his window of taking on the elite fighters seems to be shrinking rapidly. So the company may decide to cash in what is left in Conor and put him up against Paddy Pimblett in a giant PPV in the UK.