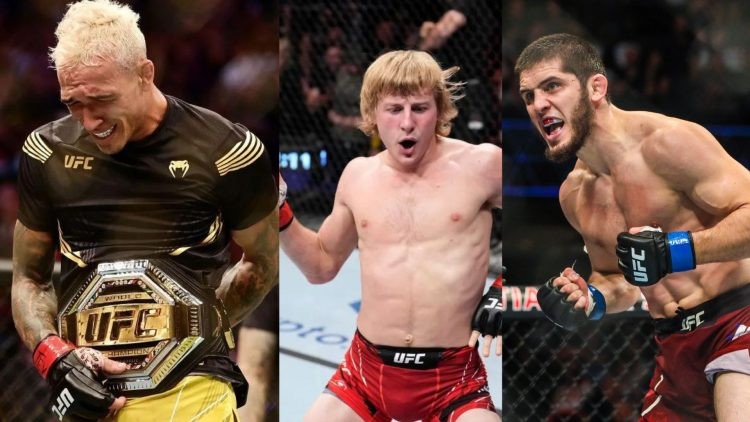 UFC 280 features a much-anticipated title fight between Charles Oliveira and Islam Makhachev. Surprisingly, Makhachev is the favorite to win this fight and many fans seem to agree with that notion. But, Paddy Pimblett is confident that Oliveria will win at UFC 280.

During the media day for UFC London, when Paddy Pimblett was asked to predict Oliveria s Makhachev, Pimblett made a bold statement about the fight and Makhachev’s UFC career so far. Pimblett even questioned Makhachev getting a title shot without beating any top opponents.

“I think Charles Oliveira wins. I think he gets a finish within 3. Simple, you know what I mean. They’re both unbelievable fighters. Islam is quality, but he hasn’t fought the caliber of opponent that Charles has fought.”

Paddy Pimblett did not seem too impressed with Islam Makhachev’s wins so far as he stated:

“I think Charles gives him so many tests that he hasn’t like he hasn’t been tested; Like he will against Charles. He hasn’t fought no one in the top 10, Islam? And he is getting a title shot? Just Dan Hooker, he was on like three weeks notice. Yeah, Charles Oliveira all day.”

Why Paddy Pimblett is right about Charles Oliveira vs Islam Makhachev

Khabib Nurmagomedov and Daniel Cormier are certain that Islam Makhachev beats Charles Oliveria with his dominant wrestling. But, Makhachev has not fought anyone that is as good as Charles Oliveira.

The toughest opponent Makhachev has faced in his UFC career is Arman Tsarukyan. And he was not able to dominate Tsarukyan. In fact, it was a very close fight with Tsarukyan securing takedown and catching Makhachev in guillotine and kimura. Now, an argument can be made that Oliveria is a much better submission artist and grappler than Tsarukyan.

And if Do Bronx catches Islam Makhachev in submission then the fight might be over really quick. Islam has certainly improved since the fight against Tsarukyan.

However, in a recent fight against Thiago Moises, Islam Makhachev struggled to put on a dominant performance. His last two wins over Bobby Green and Dan Hooker was dominant and impressive but both opponents took the fight on short notice.

On the other hand, Charles Oliveria has been beating the best guys in the division for years now including the likes of Tony Ferguson, Dustin Poirier, Michael Chandler, and Justin Gaethje. So an argument can be made that Oliveria should be the favorite to win at UFC 280 and Paddy Pimblett is right with his prediction.