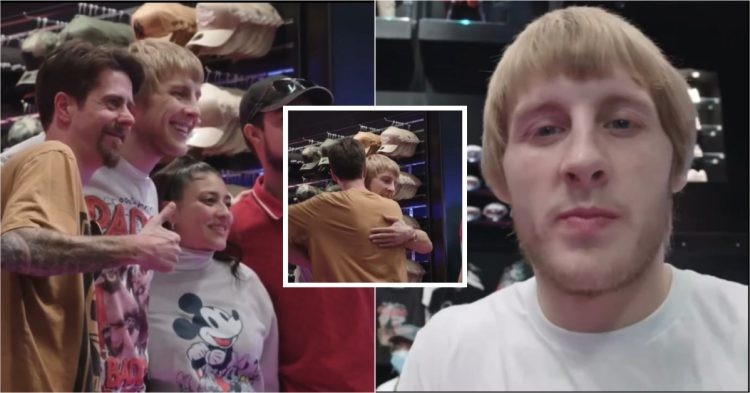 A fan expresses her gratitude to Paddy Pimblett. (Credit: Instagram)

Paddy Pimblett has a big fight coming up this weekend, as he takes on Jared Gordon in the co-main event of UFC 282. Ahead of the bout, Paddy gets a huge morale boost during a fan event, as one fan reveals how Paddy’s words encouraged him to turn his life around and save himself from suicide.

Before his last fight in July, Paddy got a piece of horrible news. In the middle of his weight cut, the 27-year-old found out that one of his extremely close friends, Ricky, died by suicide. It deeply affected the Liverpool native, who suppressed his emotions before the bout. But, after beating Jordan Leavitt, Pimblett let his emotions go and broke down in tears.

After the bout, Paddy gave one of the most inspiring interviews of all time! He pleaded for men who are suffering from emotional trauma or depression, to seek medical help. It looks like the promo was effective as one fan, who tuned in for the bout, changed his outlook on life and decided to take action to improve his mental health.

“(Let me) tell you, your video about that suicide thing saved my life,” the fan told Paddy. He then addressed the camera and said, “I have gone through a rough year this year and I was very suicidal. And Paddy’s message when he was in the ring after he won, talking about his brother, his buddy that passed away, saved my life. And I just wanted to say thank you to him. So I appreciate him very much, I’m so glad to meet him.”

Paddy Pimblett reveals what saving a life means to him

Paddy Pimblett has worked on removing the stigma on men’s health issues. Not only mental health, but Pimblett also spoke out about body image issues that men go through on a daily basis. Pimblett is a big food connoisseur and he tends to gain a few pounds when he is not in an active fight camp. Although he gets ridiculed for it, Pimblett does not think it is right.

Hence, he is grateful that his initiative to raise mental health awareness has worked. Pimblett expressed his happiness on the matter and revealed how much it meant to him.

“That means more to me than any fight ever will. Someone telling me that they did not kill themselves because of what I said,” revealed an emotional Paddy The Baddy.

Paddy Pimblett was in the headlines recently when he showed an incredible gesture while out on a stroll with his dogs. As he was walking, his dogs defecated on a lawn that belonged to his neighbor. Just like an ordinary citizen, he then rang the doorbell of his neighbors and offered to clean up the mess. He did not use his superstardom to avoid the issue.

Such incredible gestures are what make him a fan favorite. Paddy Pimblett currently holds a UFC record of 3-0 and an MMA record of 19-3. After only 3 fights in the UFC, he is getting the chance to shine at a massive PPV. He was also feuding with Jake Paul recently and accepted Paul’s offer to spar him for $1 million. Will the fans see Paddy in the boxing ring after the upcoming PPV? Only time will tell.