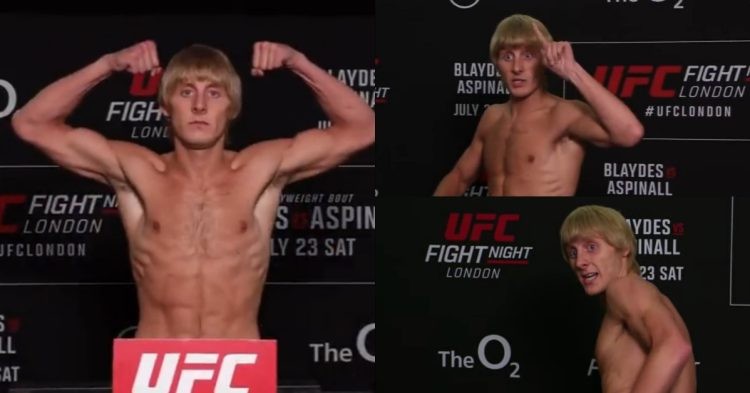 Paddy Pimblett weighs in at 156lbs. (Images via Twitter)

Paddy Pimblett just knows how to grab the headlines. He recently silenced his haters on his podcast for fat-shaming him. However, he just took it up a notch during the weigh-in for UFC London.

As the fans know, Paddy The Baddy will be fighting Jordan Leavitt at this weekend’s UFC Fight Night in London. Ahead of the camp for this particular fight, Paddy had gained some weight. After his last win against Rodrigo Vargas in March, Pimblett was in a jovial mood as he roamed around the world, eating whatever his heart desired.

But having an un-disciplinary diet is not ideal for a professional fighter. Hence, the 27-year-old became much chubbier than a fighter should. It made some fans question his professionalism and wondered whether Paddy will be able to make the weight for his bout against Jordan or not. But Pimblett shut up all his doubters and weighed in at 156lbs.

But that was not all. He then went to pull down his pant and sent a brutal message to all the distractors.

“For everybody that started to fat-shame me saying I’ll miss weight or f*****g what was it? Pull out? Kiss me a**”

Paddy Pimblett and Jordan Leavitt do not seem like they are on cordial terms. During an interview ahead of the much-anticipated event, Paddy had some harsh things to say about ‘The Monkey King.’ Jordan claimed that he will pull out his trademark twerk celebration move. But Pimblett did not take the words kindly and promised to do a move of his own.

Pimblett is slowly turning into one of the most talk-about fighters in the UFC. He has a very exciting style of fighting and his two finishes of Luigi Vendramini and Rodrigo Vargas speak for themselves. But what gives him a must-see status is his brash style of fighting. He even revealed that he is getting paid top-dollar by the promotion at the moment.

He even signed a deal with Barstool Sports which is worth seven figures. It just goes to show that the Pimblett-mania is just ready to take off. If he can live up to his promise and actually finish Jordan the way Paddy promises to, then there is no stopping this hype train. He will surely be fast-tracked into a position where Pimblett will only be 3-4 fights away from a title shot.