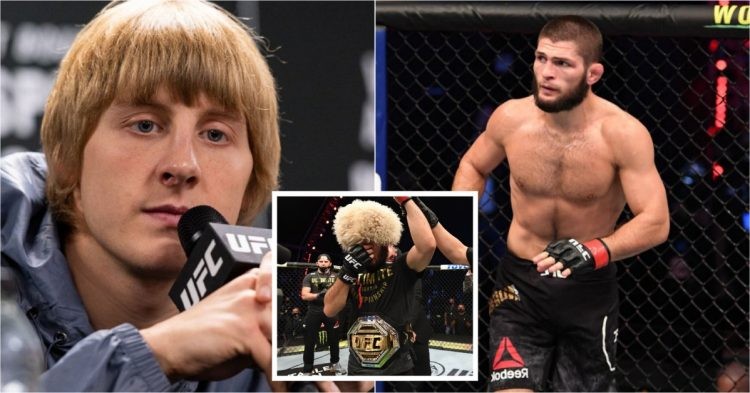 An MMA fighter and a UFC champ retiring from the sport with an undefeated record seems too good to be true. However, Khabib Nurmagomedov accomplished it in 2020, when he submitted Justin Gaethje at UFC 254 and retired with an MMA record of 29-0. Although the fans were happy to see the lightweight GOAT walk away with his head held high, Paddy Pimblett wanted the scenario to be different.

That bout ended up being Khabib’s third title defense and the last fight of his career. The Eagle was set to face Tony Ferguson for the umpteenth time in April 2022 at UFC 248. But, the event was canceled for the surging COVID-19 pandemic. Instead, UFC booked Tony vs Justin for the interim title. After winning that bout, Gaethje challenged Khabib for the undisputed title later that year.

But, the timing was not ideal for Khabib as his father died just months before that. On top of that, Khabib suffered some significant injuries during the fight camp. Hence, there were rumors that Khabib would announce his retirement after the bout. The deciding factor ultimately was the promise The Eagle made to his mother. Nurmagomedov kept the promise and hung up his gloves.

Khabib Nurmagomedov’s last fight was on 24th October 2020. At that time, Paddy Pimblett was not a part of the UFC just yet. He was still under contract with Cage Warriors and had an MMA record of 15-3. At the time, Paddy really wanted Justin Gaethje to win at UFC 254. Although professional competitiveness was a part of it, Pimblett also had a personal dislike of Khabib.

However, Pimblett did express his sorrow about the passing of Khabib’s father Abdulmanap Nurmagomedov. But he was desperately hoping for a Justin Gaethje win on the day in 2022.

“I just want Gaethje to win, badly. Yeah (I want Gaethje to win), because in MMA, people just don’t go unbeaten. You know what I mean? It’s just something that isn’t unheard of. And, I don’t want someone to do it. You know what I mean… I just don’t like Khabib as well. I feel sorry for him, his dad just died, hate to wish defeat on someone who just had something like that happen to them… I want him to get knocked out.” (h/t via @marcellus6528)

It does not look like the two are on very friendly terms as Paddy The Baddy also slammed Khabib earlier this year for the latter’s antics at Mike Tyson’s “Hotboxin” podcast. The 27-year-old called Khabib a “Karen.” In 2021, Paddy also questioned Khabib’s position in the GOAT debate. According to Paddy, only wins against Dustin Poirier, Conor McGregor and Justin Gaethje are not enough for him to be regarded as the GOAT.

The Liverpool native will fight Jared Gordon this weekend. He will feature in the co-main event of the last 2022 PPV, UFC 282. Although there is not a chance of Paddy and Khabib crossing paths, the Brit may soon run into Khabib’s cousin and the current lightweight champion Islam Makhachev, if he keeps on winning. Paddy’s UFC record stands at 3-0 and his current MMA record is 19-3.