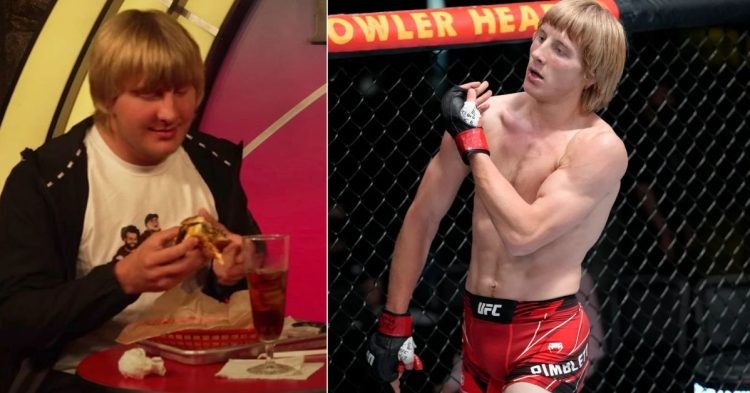 Paddy Pimblett has revealed that he will drop a massive 50 lbs in preparation for his UFC return against Jared Gordon on December 10 at UFC 282. Pimblett will return to action for the first time in the US since his UFC debut and will look to make it 4-0 inside the UFC Octagon.

In the latest episode of his vlog on YouTube, Pimblett revealed that his last fight camp for the fight against Jordan Leavitt was one of the most “weird” camps. Pimbllett only got seven weeks and had to lose around 20kg (44 lbs) to make weight.

Less than twenty days away from the fight, Pimblett reveals he has 9 kg to lose for UFC 282. “I got like nine kilos to lose lad, I have done more than that overnight. I have done 8.4 kilos overnight before. I can do nine kilos in four weeks.” Pimblett said.

Despite a lifestyle that doesn’t deter Pimblett from eating anything he likes during off-camp, the UFC lightweight maintains a strict diet during fight camp. He consumed around 1500-1800 calories in a day compared to the 6000-8000 calories he usually consumes when he is not preparing for a fight. Pimblett has never missed weight in his UFC career.

Has Paddy Pimblett missed weight in his MMA career?

Paddy Pimblett has never missed weight in his UFC career, however, there have been multiple occasions in the past where Pimblett did not hit the scales. Paddy the Baddy began his MMA career in the bantamweight division, however, he failed to make weight twice during his run at Cage Warriors.

This prompted a move to the featherweight division back in 2014. However, in just his fourth fight as a featherweight, Paddy Pimblett once again competed in a catchweight bout at 152 lbs.

Be that as it may, Pimblett was offered the title shot for the vacant Cage Warriors featherweight title and he has never missed weight since. A run at the Cage Warriors that would see him become a two-division champion, Pimblett has already become a huge name in the world of mixed martial arts in such a short period of time in the UFC.