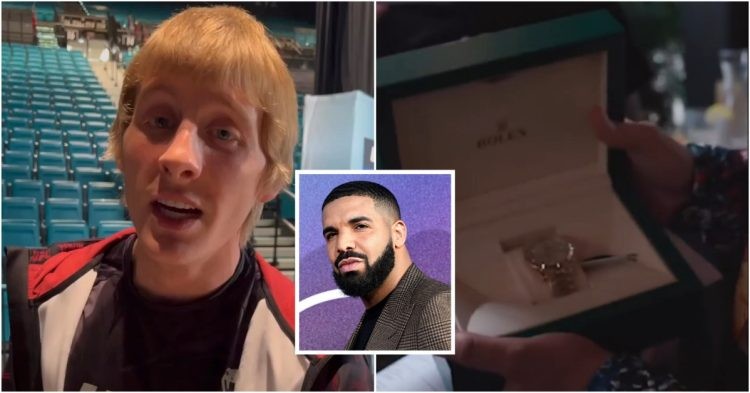 Paddy Pimblett will have his fourth UFC bout this weekend at UFC 282. He will take on fellow unranked lightweight fighter Jared Gordon in the co-main event of the PPV. Ahead of his return to the Octagon, Pimblett announced a great endeavor on his part. Pimblett has opened up a charity to help the needy and he has the perfect way of kicking off the fundraising campaign.

Ahead of the last UFC London card, rap artist Drake placed a bet on both Paddy Pimblett and Molly McCann. In the event, both Paddy and McCann were victorious and it won Drake a massive $3.7 million! After placing the bet, the musical artist promised to hand out luxury gifts to the fighters. Hence, the Canadian rapper gifted them both a piece of expensive Rolex watches.

Paddy shared it on his Instagram and expressed his happiness about the gift. However, it does not look like the Liverpool native put the watch to use and wants to put it up for auction to raise funds for his charity. Paddy also gave an explanation about why he is giving away such an expensive gift from the legendary rapper.

“This one isn’t from Drake lad. I bought this myself. It wasn’t cheap either, bought this meself. To be honest, the Drake Rolex is still unworn in the box. And I’m gonna auction that off for me charity. I wanna get some funds in for me charity. And that’s the first thing I’m gonna do. I’m gonna auction that watch off that Drake bought me. No disrespect to Drake, but I know for a fact because Drake bought that watch for Paddy The Baddy, that will go for a lot more money.”

Paddy Pimblett opens up ‘The Baddy Foundation” to help his community

Even before entering the UFC in 2021, Paddy Pimblett was really vocal about the message of men’s mental health. Pimblett spoke about his last loss in Cage Warriors and the emotional toll it took on him. At the time, Paddy The Baddy thought the loss will prevent him from ever entering the UFC. His close friend Ricky also died before the last fight by suicide.

Hence, Paddy preached the message that men should not ignore when they are going through any emotional stress. Instead of bottling it up inside themselves, men should go out of their own way to get the help they need. Hence, Paddy Pimblett has opened up a charity by the name of “The Baddy Foundation,” to help fund mental health providers.

Not only that, but the charity will also help feed the children in need as Pimblett’s foundation promises to eradicate hunger and partner with local food banks, schools, and other nonprofit organizations. However, the charity currently operates within Liverpool and there are plans to expand it throughout the UK in the coming days and months.

Recently, a fan reached out to the 27-year-old and thanked him for raising awareness against mental health stigma. Apparently, Paddy’s passionate speech after beating Jordan Leavitt inspired the fan to have a new outlook on life. Hence, Paddy Pimblett opening up a charity will certainly help a lot more people who can not necessarily afford it.