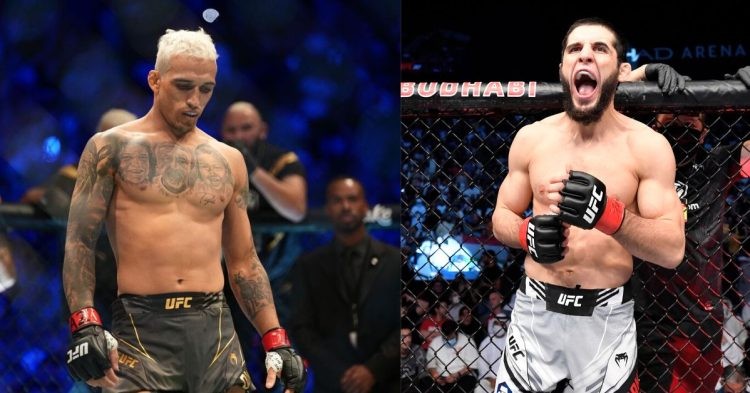 Charles Oliveira vs Islam Makhachev is all set for UFC 280(Credit: Twitter)

In one of the biggest fights of the year, Islam Makhachev will take on Charles Oliveira in the main event of UFC 280. This fight will decide the new UFC lightweight champion as Oliveira had to vacate his title after he missed weight for a fight against Justin Gaethje.

This will be the toughest matchup for Islam Makhachev so far in his UFC career. Makhachev’s wrestling has been the biggest weapon in his impressive 10-fight winning streak. However, Oliveira will not be afraid to take the fight to the ground as he is the most accomplished submission artist in UFC history.

Besides that, Oliveira’s striking will be a major deciding factor in this fight. Charles Oliveira has shown insane kickboxing skills in his last three fights against Michael Chandler, Dustin Poirier, and Justin Gaethje. With his knockout over Chandler and knockdown against Gaethje, Do Bronx proved that he does not need to look for submission to beat Islam Makhachev.

Charles Oliveira is a better striker than Islam Makhachev

“They got to start on the feet. And Makhachev has shown some improvements in the standup area. But, Charles’ kickboxing has looked unbelievably as of late, his durability has looked unreal, they are gonna end up on the ground. But I think those exchanges, especially if it goes to the later rounds, who is winning those striking battles, who is landing elbows, knees, kicks, I think that is really where we are gonna decide the winner. And then ultimately it’s gonna end on the ground.”– Felder stated

Paul Felder took on Charles Oliveira back in 2017 when the Brazilian was relatively new to competing in the lightweight division. Oliveira has even admitted that Felder was much stronger and more durable than him on that night.

However, Charles Oliveira has put in a lot of effort to gain size to compete against elite lightweights such as Islam Makhachev. In fact, Oliveira grappled Dustin Poirier on the ground, who is one of the biggest guys in the division.

Charles Oliveira has already predicted that he will finish Islam Makhachev in round 1 at UFC 280. Now fans are excited to find out whether Do Bronx can keep his promise.