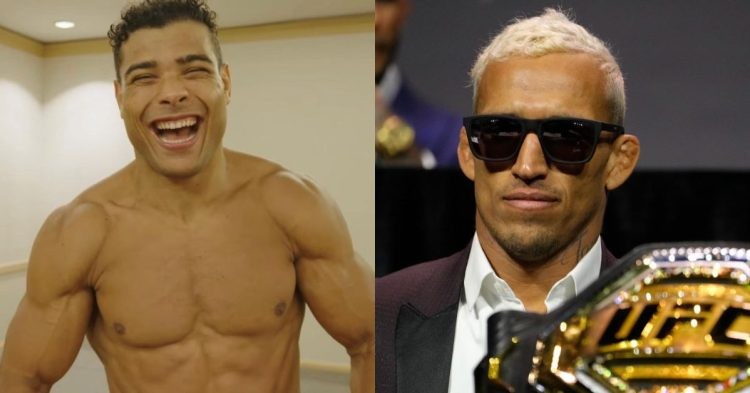 UFC middleweight Paulo Costa has trolled fellow Brazilian Charles Oliveira again. Costa has turned into a social media sensation after his relentless meme fest on Twitter. ‘Borrachinha’ has taken funny digs at almost every fighter in the roster with his memes.

Costa has trolled Oliveira on previous occasions when he missed weight. Most recently, he made fun of Oliveira’s vision impairment. In a clip titled, ‘An Ophthalmologist Removes 23 Contact Lenses from a Woman’s Eye’, Costa took a dig at Oliveira while captioning: “Bro 23? Don’t even Charles needs too much lens to see.”

Costa has been on a rampage against Oliveira ever since the lightweight missed the 155 mark at UFC 274. On that night Costa tweeted, “Good night over weighted people” and had even mocked Oliveira’s English speaking skills in the past. In a recent interview, Charles addressed this and blasted Costa.

“Borrachinha is doing this thing, doing TikTok and being crazy. Doing a lot of bullsh** and talking sh** about others. A guy who doesn’t make weight by 6-7 kgs, wanting to sh** on social media. And since he talked about me, I’m going to talk about him as well. He doesn’t know anything. About my weight or about me. And keeps talking s**t on Twitter.”

‘Do Bronx’ reminded Costa about his downfall and the threat he used to possess before as a fighter. Charles even recalled how Costa, being a BJJ black belt, “got finished by a white belt” – the middleweight champion Israel Adesanya.

Charles Oliveira has had vision problems throughout his fighting career. However, that has not deterred the Brazilian fighter from dominating the lightweight division. Be that as it may, the Brazilian has now undergone eye surgery ahead of his title fight with Islam Makhachev at UFC 280 and now can see perfectly.

‘Do Bronx’ has been fighting with severe vision impairment in the octagon. He had once joked that his eyesight is so bad, he sees three versions of every opponent and just tries to hit the middle one.

Although Oliveira can see his opponents just fine in the octagon, in the streets he is blind without his glasses. However, his poor vision did not affect any of his recent performances where he has demolished some of the best fighters in the lightweight division.

Oliveira has improved as a fighter and is now hailed as the best lightweight in the UFC. He displays an absolute savage mindset and even when he was the champion, he didn’t play safe against some of the best fighters in the division.

Oliveira won all of his recent fights against Michael Chandler, Justin Gaethje, and Dustin Poirier via stoppages. However, he will enter this fight as the betting underdog. This coming weekend at UFC 280, Oliveira faces one of the best wrestlers in Makhachev and will put his 11-win streak against the Russian’s 10-fight wins.