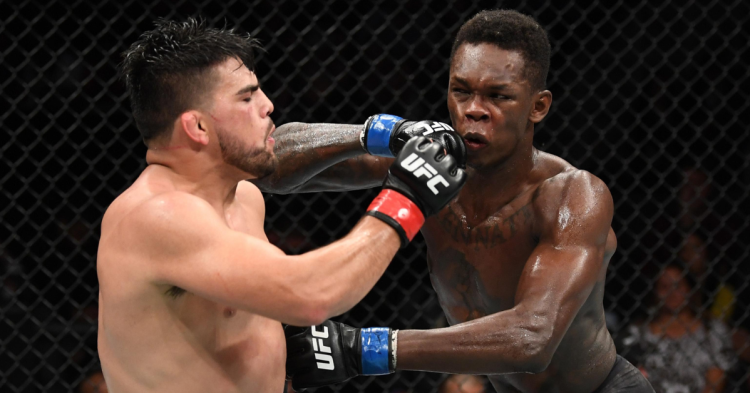 Israel Adesanya fought Kelvin Gastelum in one of the best middleweight fights in UFC history. It was a grueling five-round battle. But that win has not aged nicely for the middleweight champion.

Kelvin Gastelum has lost two fights since the interim title fight against Israel Adesanya. Darren Till completely neutralized Kelvin Gastelum while Jack Hermansson submitted him with no trouble whatsoever.

Though Kelvin Gastelum is still a tough contender in the middleweight division he has lost the value significantly since the Adesanya fight.

Kelvin Gastelum went into the fight with Israel Adesanya with a massive reach advantage. He is not in the same vicinity as Israel Adesanya when it comes to striking. Adesanya might just be the greatest striker to ever grace the UFC octagon. But, Gastelum had a ton of success in his fight against the middleweight champion.

He knocked down Israel Adesanya in the first round and rocked him badly in the third round with a head kick. Now it can be argued that Adesanya was not expecting Gastelum to commit to the head kick. But we can’t ignore the fact that Gastelum had Adesanay in trouble and won the fight.

Paulo Costa is a huge threat to Israel Adesanya

The outcome of the fight could have been different had Gastelum not shoot for a takedown after hurting Adesanya with the head kick.

Though Israel Adesanya deserves a lot of credit to showcase his toughness against Gastelum that exact sequence might repeat itself at UFC 253.

Recently, Dana Hardy came up with an argument that Paulo Costa is not as good as the other top middleweights when it comes to skillsets. However, it’s hard to overlook what Costa does inside the octagon.

He has a tremendous pressure that can not be matched by any other middleweights in UFC. His striking is insanely effective and has a high impact. He throws every strike with bad intention. And he has improved a lot on his takedown defense and ground game since his UFC debut.

It’s not too illogical to imagine Costa landing a similar head kick to rock or even knock down Adesanya. Another weapon that can be deadly for Adesanya is Costa’s overhand right. Paulo Costa can hurt Adesanya who generally has his hands down while striking.

Now saying Costa will best Adesanya in striking might be far fetched. However, overlooking Costa even in a striking battle with Adesanya will be foolish, to say the least.