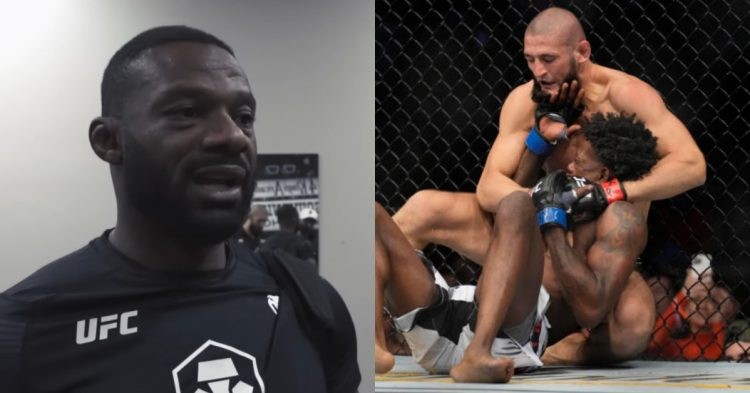 Khamzat Chimaev steam-rolled Kevin Holland in the co-main event of UFC 279. Although he held his whole fight camp trying to prepare for Nate Diaz, but the last-minute change of opponents did nothing to hamper his dominance. Despite Kevin being a black belt in Brazilian Jiu-Jitsu, Chimaev had no problem dragging him down to the mat.

Chimaev then proceeded to sneak in a D’Arce choke very swiftly and submitted Kevin at the 2:13 minute mark of the first round itself. It just goes to show the discrepancy in the level of grappling between Khamzat and Holland. It is even more surprising when Khamzat is just a purple belt in BJJ while Holland is a black belt. Khamzat’s coach recently spoke on the issue.

Alan Nascimento, who is Chimaev’s Brazilian Jiu-Jitsu trainer claims that MMA has been infiltrated by a lot of illegitimate black belts. According to him, the fighters do not want to work hard anymore. Instead, they get their black belts completely undeservingly. Nicknamed ‘Finfou,’ Alan is here to expose all the imposters.

“I’m making Khamzat expose all the fake black belts in Brazilian Jiu-Jitsu that is in the MMA. Why? Because nowadays people just get belts like they go to McDonald’s. They don’t do the job. You know, he just got his purple belt. How many black belts in his career has he finished? So that shows. I’m using him to expose many guys. If you’re legit, doesn’t fit for you. But if you’re not, you better run.”

Khamzat Chimaev has defeated 4 BJJ black belts in the UFC

There is some truth to what Finfou said after Khamzat Chimaev submitted Kevin Holland. Since making his UFC debut, Chimaev has only had one tough fight in the promotion. Although Gilbert Burns landed 119 punches on The Borz, the rest of the 5 fighters landed an accumulated 1 strike. It just shows that fighters are like deer infront of a headlight while facing Chimaev; they have no idea how to go about it.

In his last 4 fights, Khamzat Chimaev has fought Gerald Meerschaert, Li Jingliang, Gilbert Burns and the aforementioned Kevin Holland. One thing that is common among all of them, is the fact that all four are black belt holders in BJJ. Gilbert was the only one to put up a fight against the native Chechen fighter, while the others fell like flies.

Meerschaert has 27 submissions, Jingliang has 4 submissions, Burns has 8 submissions and Holland has 6 submissions in their careers. Although the loss to Chimaev does not discredit any of their previous accomplishments, it does put a stain on it. It is especially true for Jingliang and Holland, who could not hold their own at all against Khamzat.

However, Chimaev could not replicate the same dominance against Gilbert Burns. Gerald Meerschaert, on the other hand, was knocked out. So the comments made by Chimaev’s coach are less applicable to them.