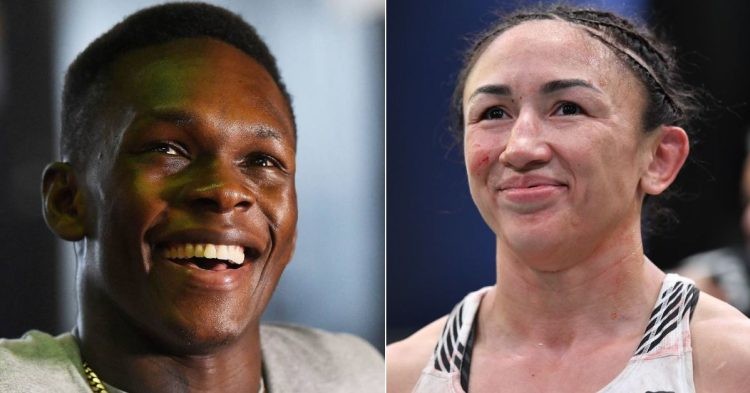 There’s a new narrative surrounding UFC 281 that is doing rounds on social media. After multiple lackluster performances from Israel Adesanya, fans are hoping for the UFC Middleweight Champion to lose on November 12, going against archrival Alex Pereira. Why? So it brings new blood and some excitement to the division.

The same is the case with UFC’s strawweight division where fans are hoping for Zhang Weili to get the job done against Carla Esparza come UFC 281. Esparza and Weili will battle it out for the strawweight gold in the co-main event on November 12 inside MSG.

The reason behind fans wanting to see both Adesanya and Esparza lose is quite simple. Fans love excitement! They like action, and it won’t be wrong to say that they enjoy stand-up. While in the case of Carla Esparza, it’s quite evident considering Esparza’s fighting style that relies dominantly on her grappling prowess.

Adesanya just said he’s gonna finish Periera in spectacular Fashion. Only two things will happen now, either w boring decision for Izzy or he gets flatlined by Periera.

Adesanya desperately needed Paulo Costa or reckless Whittaker to shine for a reason. Whenever his opponent is not reckless brawler, Adesanya’s fight becomes boring despite him being a striker, thats because of Adesanya, not Yoel.

Esparza has cruised through the strawweight division, picking up wins over the likes of Rose Namajunas, Marina Rodriguez, Yan Xiaonan, Alexa Grasso, and Michelle Waterson among others. However, the fact that she has been able to do that with her grappling skills and BJJ acumen, doesn’t sit well with fans who probably want exciting fights in UFC PPVs.

Zhang Weili’s fighting style is more on the side of exciting and entertaining as compared to Carla Esparza, so it’s no wonder a large portion of fans are expecting the Chinese fighter to get the job done at UFC 281.

As for Israel Adesanya, fans are probably tired of being teased into a barnburner only to witness a tactical counter-striking from Izzy, who will not engage in a slugfest unless his opponent advances first.

Izzy has turned into the most boring champion to watch, and thats saying a lot with Carla Esparza holding a belt. #UFC276

imagine supporting the most boring champ in the ufc

Interestingly enough, Israel Adesanya has the lowest finishing rate among active Champions in the UFC, after none other than Carla Esparza. These figures are before Leon Edwards knocked out Kamaru Usman to become the UFC’s Welterweight Champion.

What are your thoughts on Israel Adesanya and Carla Esparza as the Champions of their respective weight class? Do let us know in the comments section.