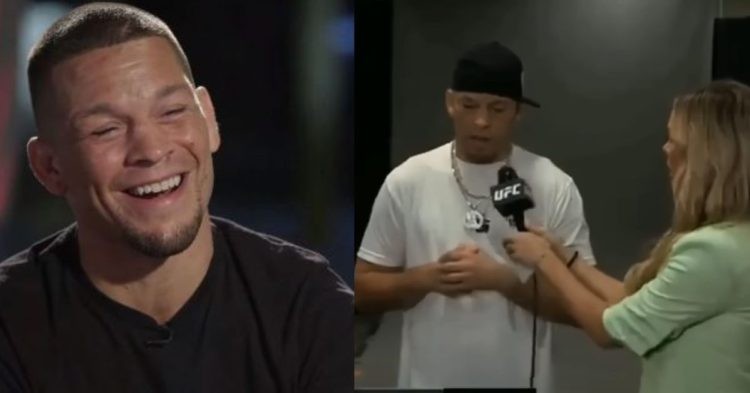 Nate Diaz was rescheduled against Tony Ferguson for the main event of UFC 279, after his former opponent, Khamzat Chimaev missed weight. This in turn led to a whole main card reshuffle and there were some massive backstage brawls involved as well.

In the aftermath of UFC 279, Nate ended the chaotic main event in the final fight of the night, by submitting Ferguson by a guillotine choke in the 4th round. However, in the process, Nate had to deal with his unorthodox fighting style of Tony too.

After the fight, Nate got interviewed by renowned UFC commentator Laura Sanko, where Nate broke his character and showed his funny side. As Diaz was asked if the leg kicks were any problems for him, Sanko got a little close to Nate.

Everyone knows how much Diaz likes his personal space. In a playful exchange, Nate replied: “I keep backing up ’cause you’re hella’ close…”

To which Laura replied by saying: “I know, I know…We gotta stay close Nate! Come on over here.”

After both broke into laughter, Nate started throwing his fists like he is shadowboxing, which got Sanko saying: “Please dear god, don’t punch me!”

Talking about the leg kicks Nate said: “I felt like I was blocking the kicks really good. And… uh…yeah, I’m fuc**** hurt!”

Ferguson was relentless in his aggressive strategy and was hoping to chop down Nate’s leg with gruesome leg kicks. In a fiery exchange, Tony suffered a brutal leg cut after Nate checked one of the leg kicks.

Two of the UFC’s biggest fan favorites, Nate Diaz and Tony Ferguson went toe-to-toe on the main card of the UFC 279 main event at the T-Mobile Arena, Las Vegas.

It was surely a dream fight for the fight fans as they have long wondered how a fight between the two legends would go. The first man to beat Conor McGregor in the UFC hurt Tony a lot with his slick boxing but was forced to eat nasty leg kicks from Ferguson.

Diaz ultimately forced ‘El Cucuy’ to tap in the 4th round. Diaz and Ferguson embraced and celebrated after Nate’s final octagon appearance as the crowd gave them a standing ovation.

In the post-fight interview with Joe Rogan, the MMA Icon confirmed that his 15-year long run with the UFC is finally over as he came to the end of his contract. The Stockton slugger said that he plans to ‘take over’ another sport, which is presumably boxing, as he referenced McGregor’s failed attempt against Floyd Mayweather in 2017, which ended with a 10th round TKO.

“So, I’m going to take over another profession and show everyone I’m the best at that then I’ll be right the f*** back to get a UFC title – the best motherf***ing title in the world,” Nate added.

Following Nate’s exit from UFC, a lot of opportunities have appeared in front of him. Bellator President is looking to welcome Diaz in MMA, whereas Jake Paul stated that he is open to fighting Diaz in a boxing bout. Diaz has also started his fighting promotion, Real Fighting Inc.