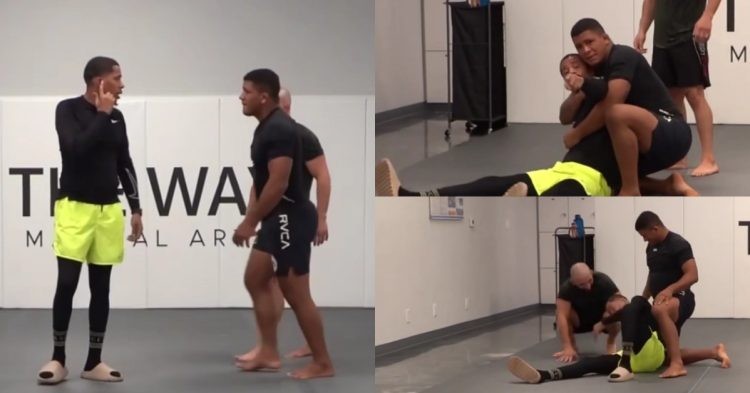 Gilbert Burns is not to be messed with! If the fans did not already know that, they will surely take note of it now. In a recent Instagram video from Full Violence, a man was seen taunting Gilbert Burns as part of a prank. But surprise to no one’s surprise, it did not go down well with Burns.

The man in question walked onto the grappling mat and pretended to talk on the phone. At that time, Burns and Jared Gordon were on the mat, drilling certain grappling moves. The man then proceeded to taunt them and said that the grappling moves will not be effective if they are in the middle of a street fight.

Although Jared Gordon seemed to take some issue with what the man had to say, it was Gilbert who jumped in and slammed the man to the ground. However, Gilbert’s reason for lashing out seemed completely different. He was not offended by the words, but he was furious about the man wearing slippers to the mat.

Grappling mats are very sacred for the fighters. They regard it as the ground where they hone their craft. On top of that, the mat has to be clean at all times. Fighters roll around on the mat whenever they are practising any kind of grappling moves. So walking on it with slippers on puts the fighters at risk of catching infections. So Gilbert’s reaction was understandable.

As soon as the man pointed at the camera, Gilbert stopped immediately and seemed to smile. However, it was certainly a dangerous prank to pull on trained fighters who risk their lives inside the cage for a living. The fans recently saw Nate Diaz slapping a reporter backstage. So pulling pranks on fighters is not the best idea in the world.

Who is Jared Gordon, the fighter with Gilbert Burns in the video?

As mentioned, Gilbert Burns was grappling with Jared Gordon. For the fans that are wondering, Jared Gordon, is a fighter in the UFC. He has competed in both featherweight and lightweight divisions. He has not had the most impressive run in the UFC. Gordon has a record of 6-4 in the company.

However, he was the 145lbs champion at CFC and defended the belt once. Although Jared lost his last fight to Grant Dawson, Gordon was on a 3 fight win streak prior to that with victories over Chris Fishgold, Danny Chavez and Joe Solecki. He is set to fight Leonardo Santos at UFC 278. As for Durinho, he is yet to find an opponent following his loss to Khamzat Chimaev at UFC 273.