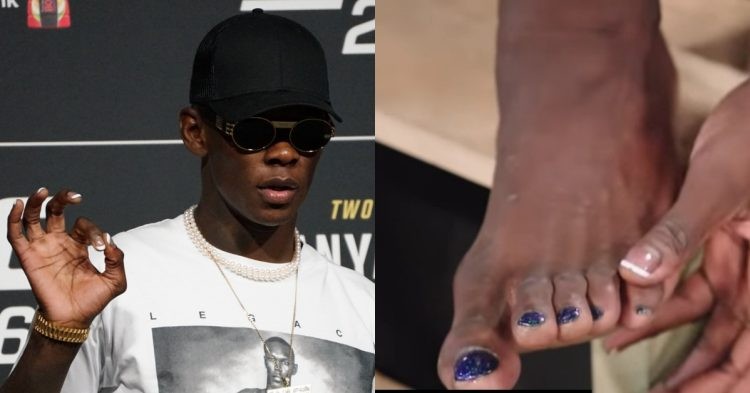 Israel Adesanya is not the type of human being to hide his personality from the world. The UFC middleweight champion is quite flamboyant and is not afraid of making bold fashion choices, which are perhaps not the manliest in the fans’ eyes. However, The Last Stylebender does not care about opinions on his personal choices.

Ahead of UFC 281, Adesanya is grooming himself for the upcoming mega-event. He recently painted all his fingernails and his toenails. However, this time, Adesanya clarified the reason why he paints his nails and keeps them in perfect shape during his fight camps. Izzy had a great answer on the matter.

“My nails are, they just, you know, fresh. I mean if you’re gonna put this in someone else’s face, on someone else’s mouth, it would be rude not to paint them. So I got the drip tips, fashionable, vibey, um. And I got the, I call them ‘kick ’em in the face, send them to space.'”

Before going to battle, warriors shine up their weapons to get them ready for use. Similarly, Izzy’s weapons are his hands and legs. Hence, Adesanya is painting up his weapons to unleash them on Alex Pereira this Saturday. Adesanya will have a golden opportunity to avenge his kickboxing losses to Pereira inside the Octagon on November 12th.

Fans have turned on Israel Adesanya in recent times. Adesanya is mostly risk-averse in the Octagon and implements a counter-attacking game plan in most of his fights. Hence, his fights are not the most entertaining to watch whenever he comes across a counter-attacker like himself. For example, his bouts against Yoel Romero and Jared Cannonier weren’t the most exciting ones.

Hence, a portion of the fanbase is not happy with his performances inside the cage, as they lack the excitement factor. It led to fans trolling the 33-year-old for his appearances. A while back, Adesanya dyed his hair pink and was trolled mercilessly online. Now, they are coming after Adesanya for his shiny nails.

Despite all the trolling, Israel Adesanya keeps his head down and does not focus on the criticism. Adesanya currently has 5-title defences in the 185lbs division. His fight against Alex Pereira is sure to be a banger as both will keep the bout on the feet and look to get the best of each other in striking. Pereira’s aggression will force Adesanya to be more active in the cage.

What do you think of the UFC 281 main event? Should Israel Adesanya be the favourite to win this weekend? Or do you think Alex Pereira is the uncrowned king of the division? Let us know in the comments down below.