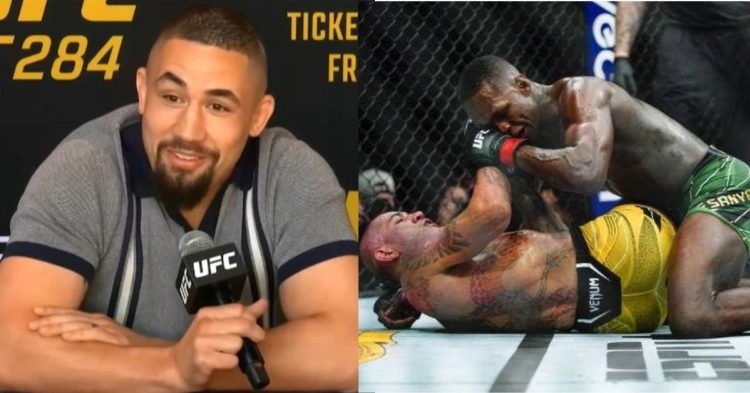 Robert Whittaker says Alex Pereira is a better matchup for him than Israel Adesanya (Credit: Twitter)

Former Middleweight champion Robert Whittaker believes that Alex Pereira is a better matchup for him than Israel Adesanya. Whittaker has been defeated by ‘The Last Stylebender’ twice, but now that Pereira is the new champion, he has a better chance of reclaiming the title.

Pereira is now 3-0 against Adesanya. He beat Izzy twice in kickboxing and now in his fourth UFC fight, he has captured the middleweight gold after beating Adesanya by TKO in the final round of their main event fight at UFC 281.

After watching the main event bout, Whittaker believes he has the edge if he fights Pereira in the future. In a recent interview, Whittaker talked about the potential fight between him and Pereira. He said: “As I said before, I’m not planning past [Paulo] Costa, but I can say that I think Pereira’s a better matchup for me than Israel.”

“Just because of the way he stands and the way he likes to push forward. The way he likes to fight I feel gives me a better edge, but in saying that, did you see the size of the fella? (laughs) I’m like, why is nobody mentioning that? Dude’s just giant. He’s an absolute giant.”

Robert Whittaker on Alex Pereira: Did ya see the size of the fella?#UFC284 pic.twitter.com/jWyKHqGF1z

Even though Pereira is huge for a middleweight, Whittaker believes that he can still take him. ‘Poatan’ looked enormous when standing next to Adesanya. Moreover, Pereira is bigger than light heavyweights like Glover Texeira, and Dominick Reyes.

Robert Whittaker is a better wrestler than Israel Adesanya. However, Whittaker has been beaten by Izzy twice. In the first fight, Adesanya won by stoppage, and in the second fight by decision. Whittaker is one of the best strikers, but Adesanya clearly has an edge in the striking department.

Meanwhile, Alex Pereira has proved that he is an elite striker. ‘Poatan’ is the only man who beat Adesanya three times in two different sports. In their second kickboxing fight, Adesanya was knocked out by the left hook. And now at UFC 281, Pereira beat Adesanya in the same way.

However, Adesanya displayed incredible wrestling and dominated Pereira in the second round. ‘The Last Stylebender’ is an average wrestler but he had almost no trouble dealing with the Brazilian on the ground.

Pereira is incredibly tough and has lethal striking skills. But he still is new to MMA and has many holes in his ground game. The Brazilian’s massive size can play an important role in their potential fight. Pereira looked bigger than Adesanya and Izzy is huge but often overlooked for his lean structure. Talking about Pereira’s size, Whittaker added:

“I’ve been face to face with Israel and it’s surprising to see like, Israel’s pretty big. He looks tall and lanky, but he’s actually a big dude. Then you see Pereira up against him and just his facial features are bigger, feet and hands and forearms are massive. I’m just thinking like, who let this guy in? (laughs) But still, I think I can take him.”

Regardless, Whittaker believes that Pereira’s fighting style can be an important factor as he is more prone to getting taken down on the ground. Whittaker will have more chance of beating Pereira because he has a better ground game. However, before that, he will need to win his next fight against Paulo Costa which takes place at UFC 284.