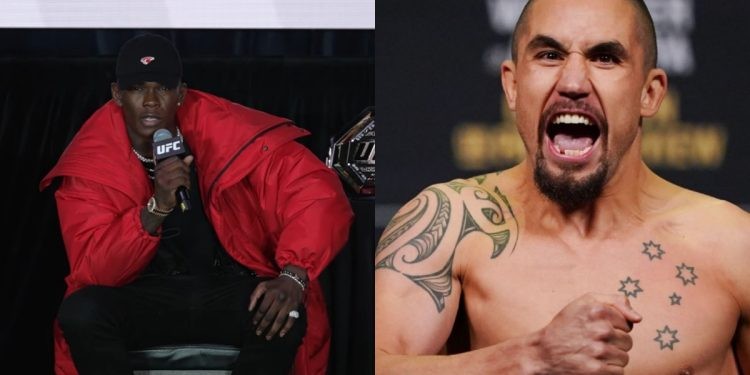 Israel Adesanya thinks Robert Whittaker should explore the light-heavyweight division instead chasing a trilogy bout against him. The UFC Middleweight Champion faced the media recently to promote the upcoming UFC 276. Izzy will face Jared Cannonier as he looks to complete his 5th title defence in a row.

Even before their paths crossed at UFC 243, Stylebender and The Reaper have had a heated rivalry. They are both two of the best 185lbs fighters in the world at the moment. Despite seeing them fight twice, many fans are wondering if Bobby Knuckles will get a third crack at Adesanya or not. Following their second bout at UFC 271, Whittaker claimed that he won the contest.

As a result, there are doubts in the minds of fans whether the third bout will see a different result or not. Although Rob is keen on fighting Izzy next, it seems as if the Kiwi wants to leave the Whittaker chapter behind and focus on the upcoming contenders such as Jared Cannonier. Speaking to the journalists on the matter, Israel Adesanya said,

“If he wants to, he should go up to 205, see what that’s about. Maybe try that for a little bit. But yeah, I’ve read that book already and I don’t like reading the same book over and over again.”

Will the fans ever see Israel Adesanya vs Robert Whittaker 3?

Israel Adesanya’s suggestion for Robert to move up to light-heavyweight is certainly an interesting one. But Whittaker has already contemplated a move to 205lbs previously. During an interview with Submission Radio in February of this year, the former 185lbs champion spoke on his desire to fight up a weight class, mostly because he does not want to cut weight anymore.

Although Rob admits that he will have a significant size disadvantage, he still believes that he has the correct fight style to do well in the division. But not only light-heavyweight, but Rob also teased a potential move down to welterweight to go up against Kamaru Usman in a super fight.

But ultimately, the 31-year-old has decided to stick around at middleweight as he is fighting Marvin Vettori at the upcoming UFC Paris fight card. On the other hand, Izzy also has the next opponent lined up for him if he gets past Cannonier at UFC 276. Reports came out that the winner of Sean Strickland vs Alex Pereira will be next in line for the belt.

Both Rob and Izzy’s immediate schedule is jam-packed. Hence, the third bout between them is not going to happen this year. They just fought in February, hence the appetite will not be there to see them fight this soon. But, if both fighters continue to maintain their dominance and stick around the division, the trilogy fight between Robert Whittaker and Israel Adesanya seems inevitable.