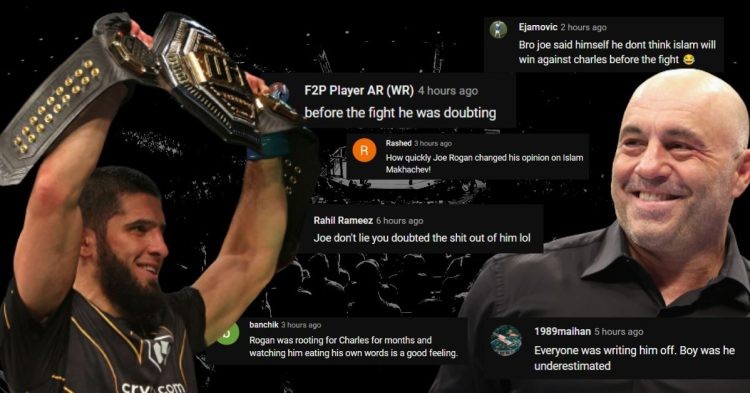 Islam Makhachev’s performance against Charles Oliveira was something to behold. The Dagestani fighter dominated Oliveira en route to his first UFC title as he submitted the Brazilian fighter to become the UFC’s lightweight champion.

Needless to say, people’s views on Makhachev must have changed following the victory considering the doubts that lingered on the Dagestani fighter after he was awarded the title shot without fighting a top-5 ranked opponent. UFC commentator Joe Rogan, who wasn’t present inside Etihad Arena for broadcasting duties also received backlash from fans after his comments on the fight following the conclusion of UFC 280.

Rogan, who was in London at the time of UFC 280, shared his thoughts on the fight in a recent episode of the JRE podcast. The BJJ black belt credited Makhachev for his spectacular victory and recalled how he was always in awe of the Dagestani fighter.

Fans were quick to slam Rogan, who had earlier leaned towards Charles Oliveira to get the job done at UFC 280. Rogan had spoken highly of Oliveira’s ground game and had warned Makhachev about going to the ground with the Brazilian sensation.

Reacting to Joe Rogan’s thoughts on Charles Oliveira vs Islam Makhachev, fans slammed the UFC commentator for singing praises of Makhachev after initially siding with Do Bronx.

“Watching Islam and Charles Oliveira, what a fight that was! Islam Makhachev must have the most incredible squeeze. His squeeze must be out of this world because you see how quick Charles tapped once he clamped that on him.”

“That dude is on another level. He is the truth. I was always impressed with him.” Rogan said.

To say it was a hard-fought victory might not be justified for the way Islam Makhachev triumphed over the former champion to lift the UFC gold.