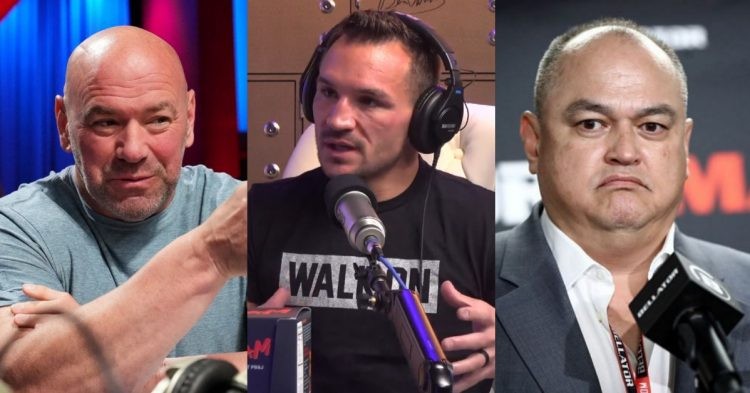 In September 2020, former Bellator lightweight champ Michael Chandler signed for the biggest MMA promotion in the world, UFC. Although there were some speculations that the move may happen, it was still a big headline when the move went through. Chandler was an exciting prospect for the UFC because he is an elite fighter and he puts on entertaining fights.

He knocked out Dan Hooker on his debut and fought Charles Oliveira for the lightweight championship in his second UFC fight. Although he was ultimately unsuccessful in becoming the champ, Chandler has delivered on his promise of entertainment and currently holds a UFC record of 2-2.

So what has been the biggest difference between the UFC and Bellator? In a recent appearance on the PBD Podcast, Chandler reveals that Dana White is the driving factor behind the success of the UFC.

When Chandler was asked to differentiate between White and his old boss Scott Coker, Michael had a very interesting answer. According to Chandler, White is much more serious about expanding the UFC brand than Coker, who is not as aggressive with his promotional ideas for Bellator.

“I mean Dana is on a different level when it comes to the celebrity. You Know like Dana is a huge huge name. Dana is the (man). When he speaks people listen, When he speaks it is mixed martial arts. That’s what people take cause he has been doing it for so much longer. You know Dana is a little bit more brash, Scott is a little bit more reserved, so there’s pros and cons to both of those from a media and PR perspective. I’m sure you can talk to the UFC about that.”

“But I will say, I think Scott Coker does take growing Bellator seriously. But not as serious as Dana. I think Dana eats, sleeps and breathes it. It is his identity, it is his lifestyle, it is him. The UFC is Dana White, Dana White is the UFC and that’s a beautiful thing.”

Michael Chandler did not explicitly pick a side. However, he was certainly more complimentary toward Dana. Although it may be because he is currently employed by the UFC, but taking a look at what Dana has done with the UFC will justify Chandler’s opinion. White has turned MMA into global and a mainstream sport.

Since taking over the UFC in 2001, Dana has worked tirelessly to legalize the sport around the world. Not only that, opening up UFC performance institutes in countries like China has also spread the sport to new territories. In the year 2021, UFC had revenue which almost touched $1 Billion, whereas Bellator could not even break the $50 million mark as per GrowJo.

But White is not stopping there and has laid out the plan to expand the brand much further in the next 6-7 years.

Michael Chandler reveals why he wanted to work for Dana White

Michael Chandler is not a new fighter by any means. He has been a pro-MMA fighter since 2009. He is a 3-time Bellator lightweight champ and has fought 23-times in the promotion. Hence, he wanted a chance to explore new options in his career. Reaching out to the UFC was a no-brainer and working for Dana White was a lucrative prospect for him.

Chandler also told a great story about how the UFC President decided to sign him. The 36-year-old was always an admirer of Dana, who had a really good business mind. Hence, Chandler wanted to impress Dana in order to get a deal with the UFC. However, the call did not go as one may have expected it to go.

“That’s just the kind of mentality that you want in your boss. That’s what I resonate with. In my meeting with, my first phone call with him, I just, I said, ‘Hey, I wanna be a good thing for your organization. I promise you, you’ll have never signed a guy that is more equally yoked with you and he hung up on me. He hung up on me and called Hunter Campbell, who is his right-hand man. So then he called me back, and then a couple (of) days later, we got a contract figured out.”

Michael Chandler already has his next opponent sorted. He will step inside the Octagon against Dustin Poirier at UFC 281. It should be a banger of a contest and the winner will be expected to get the next title shot against the winner of Charles Oliveira vs Islam Makhachev, which is set for UFC 280.