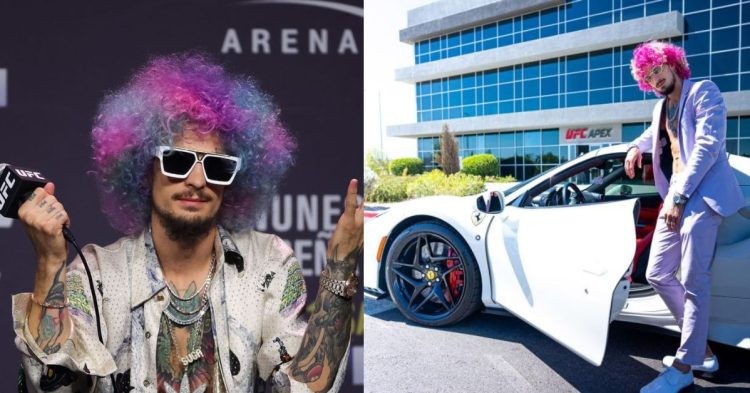 Henry Cejudo aka ‘Triple C’ has weighed in on ‘Sugar’ Sean O’Malley’s physical appearance ahead of the biggest fight of his career. Sean O’Malley is scheduled to fight former UFC bantamweight champion Petr Yan at UFC 280 on October 22.

Cejudo, in a recent video posted on his YouTube channel, said “When he (O’Malley) first came into the UFC, he looked like Milhouse ..(the nerdy character from the sitcom ‘The Simpsons’).No tattoos, his curly hair, pretty. He’s a little Jolly Green Giant-type kid. And now all of a sudden, he’s got tattoos, he dyes his hair, he’s riding Lamborghinis, sleeping in silk pajamas.

“He understands the marketing game too. But when you start getting tattoos on your face, and you start doing X, Y, and Z; I start to wonder are you like ‘6ix9ine’ (American rapper)? Are you actually gonna buy into your persona to where you become that?” Cejudo continued.

Sean O’Malley has certainly worked his way to become one of most recognizable fighter in the entire UFC roaster. His distinctive personality has played a huge part in him becoming a fan-favorite. Cejudo has warned O’Malley about the distractions he might face if he gets to deep into his flamboyant persona.

Although, O’Malley doesn’t seem to be distracted in any sense considering his recent performances inside the octagon. Fighting Petr Yan is a major step-up in competition for O’Malley. Yan is coming off a demotivating loss to Aljamain Sterling while O’Malley’s last fight resulted in a No contest due to an accidental eye poke.

“Every single fight I feel like I’m the main event, and I bet if you could statistically look at who the fans are most excited to see fight, then you’d have data to back that up.” Not many twelfth ranked fighters in the world are able to claim that.

But Sean O’Malley has achieved a status in the sport that many ‘champions’ dream of. His flashy lifestyle and crazy knock outs inside the cage have earned him that spot.

Private jets, exotic sports cars and flashy outfits have become a norm for O’Malley. The ‘Sugar show’ currently has a huge following on social media with over 2 million followers on Instagram and 450k subscribers on YouTube. O’Malley is a fan-favorite, with his highlight personality and charisma, there is no doubt that he could be one of the biggest stars in the sport if he continues to rack up victories inside the octagon.