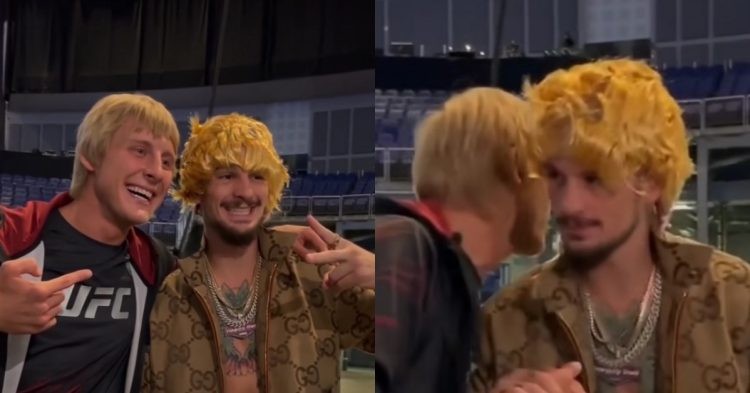 It looks like Sean O’Malley and Paddy Pimblett are quite good friends. Paddy is set to fight Jordan Leavitt at UFC London this weekend. Although his fight is neither the main event nor the co-main event, still Paddy Pimblett seems to get the most press out of any fighter. It just goes to show how bright Pimblett’s star is shining right now.

Now it seems like UFC superstar Sean O’Malley will be in attendance on July 23rd at UFC Fight Night in London. In a recent video circulating around social media, O’Malley and Pimblett are seen coming together after the ceremonial weigh-ins for the upcoming event. In the video, Sugar Sean could be seen wearing a ridiculous Paddy Pimblett wig as a sign of support for the Liverpool native.

Sean and Paddy shared a very warm hug and the latter’s shockingly good physic seemed to catch O’Malley off guard. He complimented Paddy on losing the extra weight that he carried around ahead of the camp for the fight this Saturday. Sean even went on to mimic the Liverpool accent and asked Paddy for a prediction on the fight. Paddy stated that he will finish Leavitt inside 1 round.

Is Paddy Pimblett the next big thing in the UFC?

There is no doubt that Paddy Pimblett slowly becoming the most sought-after star in the UFC. Although he is only about to have his third fight inside the UFC Octagon, the buzz surrounding his upcoming bout inside the O2 Arena is massive. Despite not featuring in the main event, Pimblett is getting the star treatment which is usually reserved for the main event fighters.

Paddy recently stated that he will not be fighting on UK soil for a significant period of time as the UFC wants him to be part of all the major PPVs. So it shows how much faith they truly have in the Brit. He has previously stated the wish to fight inside a sold-out stadium in England. Paddy either wants to fight at Annfield or the Wembley Stadium.

However, all this talk around his box-office potential will mean nothing if he does not back it up inside the Octagon. He will have the chance to prove his legitimacy once more this Saturday at UFC London inside the O2 Arena.