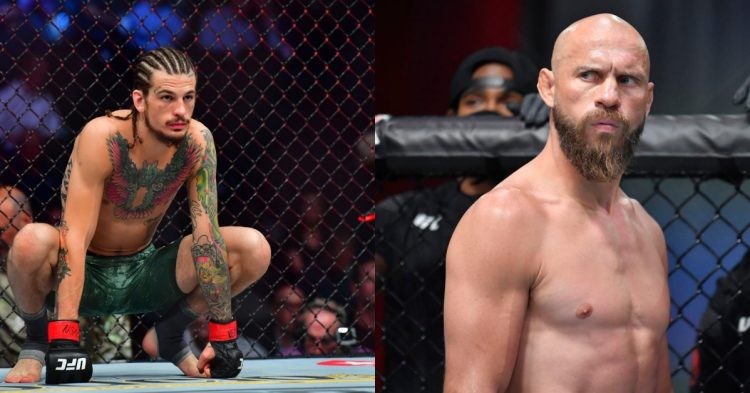 Donald Cerrone in and Sean O'Malley out? (Images via Twitter)

In a major development, the UFC 276 card has seen a massive re-shuffle. Sean O’Malley misses out on a spot in the UFC 276 main card! Instead, Jim Miller vs Donald Cerrone will take up the spot on the main card on July 2nd.

Jim Miller was scheduled to fight Bobby Green in the early prelims of the event. But Bobby Green recently pulled out of the contest and veteran lightweight fighter Donald Cerrone has accepted to step in to replace Green. Following Donald’s involvement, the bout was moved to the main card.

#UFC276 update
– Green out. Cerrone in against Miller. Fight moves to the PPV.
– Munhoz vs. O’Malley featured prelim now.
– Eye vs. Barber moves to the early prelims.

The main card will now have Israel Adesanya vs Jared Cannonier in the main event. In the co-main, Alexander Volkanovski will fight Max Holloway. The very first bout of the card will feature the former UFC women’s bantamweight belt Miesha Tate taking on Lauren Murphy.

In a no. 1 contender fight for the middleweight title, Alex Pereira will take on Sean Strickland. The aforementioned bout between Jim Miller and Donald Cerrone will also be on the card.

The Future Maycee Barber will compete as she will go head to head against Jessica Eye. However, the bout will now be on the early prelims instead of being on the prelims as previously announced.

Why was Sean O’Malley removed from the UFC 276 main card?

Suga Sean will have the biggest bout of his career against Pedro Munhoz, as he looks to break into the top 10 of the bantamweight division. Hence the spot on the main card would have been huge for the young fighter to build his brand even further. However, Sean has been given an arguably better spot.

The main event of the prelims will be available on ESPN+ for free. That spot is usually reserved for a fighter who the UFC sees as a future superstar. Hence, they put them in a spot where they would be exposed to even the fans who may not end up buying the PPV. The 27-year-old is currently on track to be the next big thing for the UFC and his prelims main event spot solidifies it.

It will also provide the UFC with the opportunity to honour a loyal soldier in the form of Donald Cerrone. Cowboy has had 37 fights in the promotion, which is unheard of. He has always been the man that the company called whenever they needed a big-name fighter on short notice.

Although Cerrone has seen extreme highs in his career, his record in the recent past has not been anything to write home about. The 39-year-old has gone winless in his last 6 bouts. He was scheduled to fight Joe Lauzon twice recently. But the bout fell through each time.

Hence the main card spot at the international fight week card will be the perfect opportunity for Cowboy to possibly has goodbye to the sport.