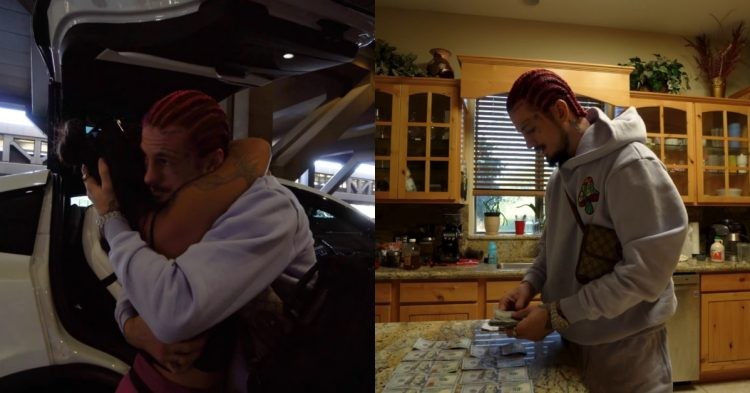 Sean O’Malley is just one step away from fulfilling his goal of fighting for the UFC belt. He will take on Petr Yan on the main card of UFC 280. UFC President Dana White earlier confirmed that the winner of this particular fight will get the next crack at the bantamweight title. So both will be motivated to do well in the fight as they leave their respective homes for the event in the UAE.

However, before leaving his house, O’Malley has left a big surprise for his wife Danya Gonzalez. In the latest video on his YouTube channel, Sean could be seen leaving $5000 on the kitchen counter of his house in the most cinematic way possible! As a cherry on top, he also left a $100 gift card as he will not be there to make coffee for his wife.

“Giving Danny a little surprise for when she gets home after she drops us off. A little 5 thousand in cash and then a 100-dollar gift card to Blackrocks. I make her coffee every morning. She’s sad I’m not gonna be able to make it for her anymore.”

Danya and Sean do share a very unique and loving bond. The UFC fighter has previously talked about their open relationship. Despite seeing other people, Sean appreciates Danya very much. Hence, it is not surprising to see O’Malley taking care of his wife, who is also his hairstylist.

Sugar Sean recently revealed that he does not depend on his UFC fight purses to earn a living. He streams on Twitch, has a popular YouTube channel and sells a lot of merchandise. Sean has certainly built a big name for himself and he stated that he earns close to six figures per month from all of his outside-the-Octagon ventures.

Sean O’Malley has a daughter with his wife Danya Gonzalez named Elena. Previously, he stated that Elena would miss her father very much as he is away for the upcoming PPV. O’Malley revealed that Elena will search for him all over the house. So it looks like the 27-year-old is taking care of both his daughter and his wife as he braces himself for the toughest challenge of his career.

Petr Yan is currently ranked no. 1 in the 135lbs division and is the former champion of the weight class. So beating him will definitely validate O’Malley as the most deserving candidate for the belt. However, the odds are stacked against the rising superstar.

Following his bad loss to Marlon Vera at UFC 252, Sean has recovered beautifully with some great results. So all eyes will be on him to see if Sean can make the most of this golden opportunity or not. What are your thoughts on it? Let us know in the comments down below.