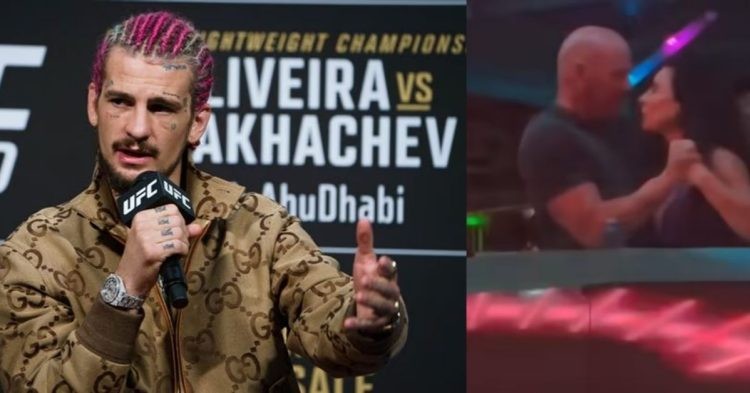 Sean O’Malley has recently become one of the UFC’s biggest stars. To reach this point, he expertly employed a combination of social media and marketing. He is also no slouch in the octagon as he recently beat #1 bantamweight, Petr Yan. Owing to these ventures and his performances in the cage, ‘Suga’ is currently one of the biggest voices in MMA.

His boss, UFC President Dana White recently came under a lot of scrutiny over an altercation he had with his wife. A video showed Dana slapping his wife after she had done the same to him.

Dana White’s latest venture, Power Slap was canceled after the video surfaced. It was also revealed that he had an affair with his wife’s sister. The video did not do any favors to Dana’s public image with people calling him all sorts of names and asking for his removal from the UFC presidency.

Now, Suga Sean has weighed in on this debacle as seen on the Bromalley Podcast. “I feel bad for Dana. His wife slapped him. That is RUDE. And it deserved a slapping back.” joked O’Malley. He continued, “I don’t know, it’s a tricky one. It’s like treating people how you wanna be treated.”

In light of Dana White’s apology and admission of guilt, Sean O’Malley’s defense of White does not seem like a wise choice. Nevertheless, this is one of the reasons fans love Suga Sean O’Malley. The UFC bantamweight has never shied away from sharing his opinion regarding something. And he was joking for most of the time as he defended White in a very tongue-in-cheek manner.

Under the video where Suga defended Dana, fans seemed to be very divided on the matter. There were people who thought Dana was right and others who believed he should be jailed. Some were of the belief that the UFC President had received special treatment from the media, while others simply seemed amused by Suga Sean and his brother’s analysis of the situation.

Many seemed to enjoy Sean’s comical analysis, making jokes of their own about the situation. One fan wrote, ‘It was a nice counter” following it up with some emojis. Another said, “Was followed by a single leg attempt if you slow the video down.” Many of these users also seemed to agree with O’Malley’s assessment of the whole incident.

Many fans  O’Malley’s take on the debacle. “Sean’s gonna say what daddy Dana wants him to say,” said one fan’s comment. They accused him of being a parrot for the UFC and only saying things Dana likes to hear. A user wrote, “Predictable siding with the boss Sean!” furthering this notion.

.The MMA community seems as divided as ever and Suga’s comments section tells the same story. Dana White’s actions were unexpected, to say the least, and many are still in shock about it. Only the coming days will reveal how all this drama and controversy unfold.