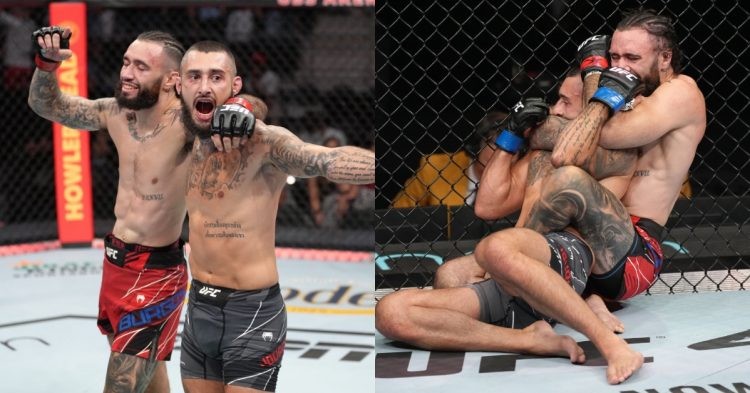 Who won the bout between Shane Burgos and Charles Jourdain? (Images via Twitter)

Shane Burgos and Charles Jourdain put up one of the best fights in recent memory at UFC Long Island. Although Shane was the hometown fighter, by the end of the contest, the fans were on their feet to applaud both fighters.

The hometown boy ultimately got his hands raised via a majority decision as two judges scored it 29-28 in favour of Shane whereas one judge scored the fight 28-28. It meant the Burgos was the one to walk away with the victory.

Although the bout was really entertaining, was Shane Burgos the right winner? Did Charles Jourdain have a case to feel upset? Let’s take a look at the stats of the fight to see if the judges really made the right decision by awarding to fight to Shane or not.

A plain look at the stats will give you an idea as to why Charles Jourdain may not be happy with the result of the fight. Jourdain landed 113 significant strikes out of an attempted 188. In comparison, Shane Burgos only managed to land 42 significant strikes out of an attempted 80. But Burgos landed 2 takedowns as opposed to Charles’ 0 takedowns in the fight.

It proves how active Jourdain was in the Octagon. He even survived a great body triangle submission attempt from Burgos. He diversified his strikes very well during the bout as he landed 72 head strikes, 36 body strikes and 5 leg kicks. But Shane was much more focused on the leg kicks. He landed 28 kicks, 16 headshots and 6 body strikes.

Although he may not have had the most amount of offence, Burgos used his strikes in a clever way. He mixed up his leg kicks in order to set up the headshot. Whenever he went after Jourdain’s head, Burgos did it with a purpose. Although Charles outlanded Shane in every round, Burgos did most of the damage.

On top of that, Burgos had a total of 6 minutes and 25 seconds of control on the mat. He took Jourdain down once in round 1 and twice in round 2. He was the clear winner of both of those fights. But Jourdain did his best work in round 3 as he landed 84 significant strikes and had a control time of 1 minute and 27 seconds.

However, judges scored the fight based on who did more damage. Hence, Shane Burgos was the rightful winner. Although it is unfortunate for Charles Jourdain to not get his hand raised, the UFC featherweight fighter was never in a position to end the fight.

But one thing that caught the fans by surprise was the fact that judge Mike Bell, who had the bout 28-28, scored the second round 10-8. Although a 10-9 would not have made a difference to the result, in the end, it was still debatable whether it was really a 10-8 round for Burgos or not.

Who do you think won the bout between Shane Burgos and Charles Jourdain? Let us know your thoughts on the rightful winner in the comments down below.