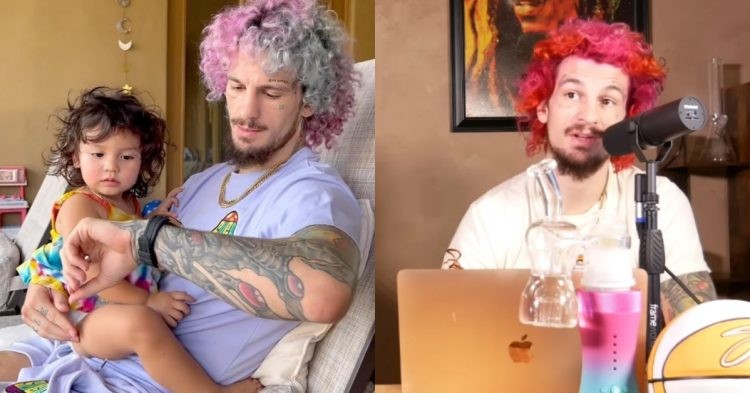 Fighters often sacrifice a lot for their career and staying away from their family members is one such thing. Recently UFC bantamweight fighter Sean O’Malley opened up on his story ahead of UFC 280, where he will fight top-ranked 135lbs fighter and the former champ of the division Petr Yan. For this particular event, Sean will have to stay from his family for almost 3 weeks.

In 2020, Sean O’Malley and his wife Danya Gonzalez were blessed with a daughter, Elena. In a recent podcast, O’Malley spoke about leaving his daughter to attend the fight in Abu Dhabi. He revealed that it is the very first time that he will have to leave his daughter alone. The Suga Show also described the adorable way Elena always wants to be with her father.

“I was thinking about leaving Elena for this long. And I was like, ‘f**k, she’s gonna be (sad). Every morning like she’ll come out, we’ll hear her in a little bit, she’ll go, ‘dad, dad, dada?’ She’ll be looking for me every morning. Then send Danny sends me snaps of her walking around, ‘dad,’ looking for me in the house. I’m like that’s gonna hurt, that’s gonna be hard.”

Although Sean may not want to leave his daughter and family behind, he has to do so in order to progress his career. Petr Yan is considered to be one of the best fighters in the division and beating him would essentially guarantee the next title shot.

Coincidentally, the champ Aljamain Sterling is also on the card, defending his belt in the co-main. Hence, O’Malley will have the chance to cement his spot with a thunderous win over Yan. The 27-year-old previously predicted that he will knock out the Russian fighter. Can O’Malley do so at UFC 280? Only time will tell.

Sean O’Malley described his daughter’s birth as an “accident”

Sean O’Malley is a very interesting character. From having face tattoos to openly talking about his non-monogamous relationship with his wife, Sean is not afraid of tackling issues that may be considered taboo. Hence, it was not surprising when he revealed that the birth of his daughter was a mistake. However, not the kind of mistake that he was unhappy about.

“I’ve known I have wanted kids since I was a little dude. I remember being 12 years old, 13 years old, breaking up with this girl because she didn’t want kids, so I’ve wanted kids for a long time… She was an accident, but it’s been everything like I’ve thought it would be, so it’s been good.” (h/t via EssentiallySports)

It is obvious from his comments that O’Malley is an out-and-out family man. He loves his daughter and wife and the prospect of spending two and a half weeks away from his family will no doubt be an extremely tough challenge for him. But it will be all worth it if he manages to beat Yan at UFC 280 and become the next title contender in the division.