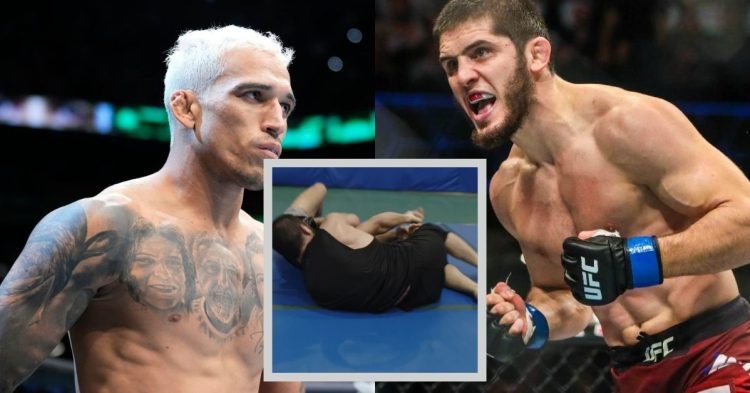 Islam Makhachev will face Charles Oliveira in the main event of UFC 280 for the vacant lightweight title. Ahead of the much-anticipated bout, Makhachev has been training hard and preparing for his toughest opponent in the promotion so far.

In the recent episode of ‘Prelude to UFC 280’, Makhachev can be seen working on his grappling technique with his training partner. The episode also features fighters like Belal Muhammad, Abubakar Nurmagomedov, and the former lightweight champ, Khabib Nurmagomedov.

While working on his ground games, Makhachev can be seen accidentally submitting his training partner unconscious for a moment. After letting him go, Makhachev says: “It was recorded.” The partner wakes up from sleep and asks in disbelief: “I slept?”

To which Makhachev replies looking at the camera: “He sleep, just woke up.”

Makhachev has the best Sambo in the UFC, and he has shown incredible dominance over his opponents in his recent fights. His domain over grappling looked much similar to Khabib Nurmagomedov’s fighting style. Nurmagomedov has been training Makhachev for this title fight and has also been a mentor to the latter for his whole career.

However, the Dagestani must take this fight seriously as he can expect Oliveira at his best form. The Brazilian is coming with the intent to reclaim the title that he lost without losing a fight. He was stripped of the belt for missing weight by a slight mark in his last title defense at UFC 274.

Watch the full episode below:

Islam Makhachev vs. Charles Oliveira: Who is the better grappler?

The main event of UFC 280 will feature an epic battle between Islam Makhachev and Charles Oliveira, who are two of the best grapplers in the promotion. They will be fighting for the vacant lightweight title.

The former lightweight champion, Oliveira is riding an incredible 11-fight win streak, while his opponent Makhachev is on a 10-fight win streak. Both of the fighters have amazing grappling skills.

Although Oliveira has the most submission finishes in UFC history, Makhachev’s ground game poses an equal threat to the Brazilian. The Dagestani is only second to his mentor and UFC G.O.A.T. Khabib Nurmagomedov in terms of wrestling.

However, in this matchup between two of the elite grapplers, Oliveira has more experience with some of the best strikers in the division. Instead of heavily relying on his jiu-jitsu, Oliveira likes to stand and trade shots on feet. ‘Do Bronx’ has also shown his incredible durability and dangerous Muay Thai-styled striking.

Even though Oliveira has finished Michael Chandler, Dustin Poirier, and Justin Gaethje, he will enter this fight as a betting underdog against Makhachev. This fight will not only answer the most asked question of who is the better fighter between Oliveira and Makahchev but also guarantee an absolute banger fight.