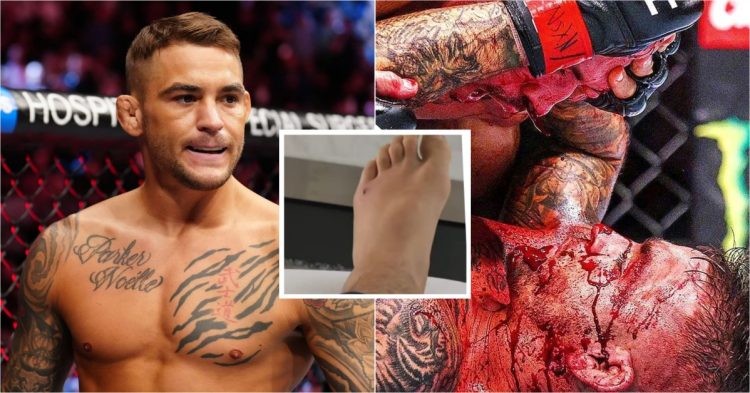 Former UFC interim lightweight champ Dustin Poirier (MMA record 29-7) is currently suffering from a bad case of staph infection. Dustin Poirier shared it on his social media platform and let the fans know that the situation is not in control yet and he is having to visit the hospital on a regular basis in recent days

Going on day 2 in the hospital. Shits getting serious

In his last fight at UFC 281, Dustin Poirier had an all-time classic bout against Michael Chandler. Poirier won the bout via submission in the third round to bounce back from a disappointing loss against Charles Oliveira.

It looks like Dustin got the staph infection immediately afterward. The MSG PPV was on November 12th. As fans know, fighters are not allowed to compete with a staph infection.

Hence, it is likely that Poirier caught the infection sometime after the fight. Poirier previously posted a picture of one of his legs which showed signs of the infection and described the severity of the incident. It was so bad that Poirier could not even walk on his feet. He also shared another image where he could be seen getting his bloodwork done.

Michael Chandler vs Dustin Poirier at UFC 281 was a bloody affair. From pretty much the first minute onwards, both did some significant damage to the other. There were moments in the contest when Michael Chandler was inside Dustin’s guard. During one such exchange, Michael cleared the blood inside his nose on Dustin’s face. The Diamond even posted a photo of that on Instagram.

After the news of Poirier’s recent infection, fans have come up with a very interesting story. According to some fans on Twitter, the timing of Poirier’s infection is very convenient and they are blaming the former Bellator champ for the staph infection.

Just how nasty were the contents in Chandler’s nose?

Staph infection is pretty common for combat sports athletes and jiu-jitsu practitioners. Perhaps the most famous case of staph infection took place at UFC 216 when Kevin Lee fought Tony Ferguson for the interim lightweight belt. He had a very visible infection mark on his torso. Despite being compromised, Lee put on a good performance before being subbed by Tony.

However, UFC takes it very seriously now as a bad case of staph infection can be life-threatening. They recently suspended light heavyweight fighter Ilir Latifi for not coming clean about his staph infection ahead of the bout against Aleksei Oleinik. The Nevada State Athletic Commission (NSAC) handed him a 3-month suspension for the incident.