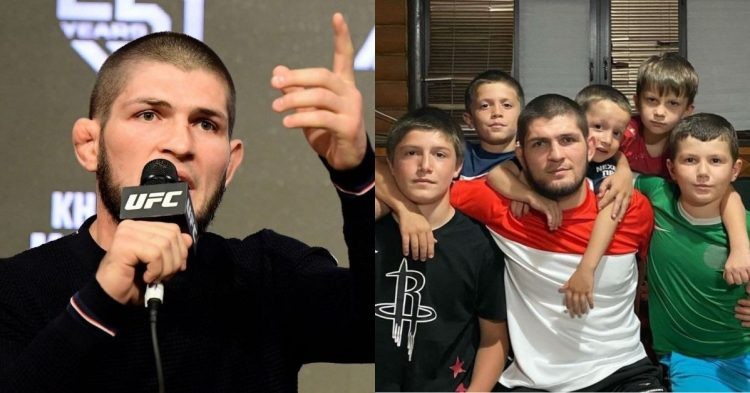 After retiring from the UFC in 2020 on a high note, Khabib Nurmagomedov is proving his mettle as a coach. A big example of The Eagle’s success as a coach is Islam Makhachev who became the undisputed lightweight champion by submitting Charles Oliveira in the recently concluded UFC 280 PPV.

While he was helping Islam in his training camp, Khabib gave some of his valuable time and made an appearance on the Wahed podcast. While having a conversation, the former UFC champion discussed topics from how to manage money and several other things.

During one of the segments of the episode, the podcast host asked Khabib how he intends to raise his kids. The Eagle said that he wants to get the perfect balance of giving them some things that they require and also teaching them to live without his acquired wealth.

Moreover, he has revealed that will be strict with his kids and not give them everything that they want because Khabib thinks that it will make them complacent.

“Sometimes love can kill people, sometimes not all the time you know. Sometimes you love your kid you give him everything and he grew up like I don’t know like a vegetable. You have to teach him how to live. But sometimes like I tell when my kids ask me something I all the time say not everything like you want.”

Khabib Nurmagomedov on why Dagestan produces so many elite fighters

There are several fighters from Dagestan like Shamil Gamzatov and Abubakar Nurmagomedov who are rising through the ranks and have great potential to make it big in MMA. While speaking at a podcast, Khabib Nurmagomedov revealed why many elite fighters are coming out of Dagestan.

The former UFC champion believes that as Dagestan is not a rich republic in Russia people living there are poor and they have the motivation to work hard and make it big. He also thinks that the next set of talented fighters would most likely come from a poor country or city.

Thereafter Khabib gave an example of how Leon Edwards who is from the UK made it to the top and became a champion after coming out from a hard life. It is true that fighters who have faced a lot of difficulties early in their life have strived hard and become successful in the promotion.

As of now, it doesn’t look like there is a rival country that will produce more elite fighters than Dagestan as there are several top prospects from the Russian Republic who are showing their potential in the UFC.