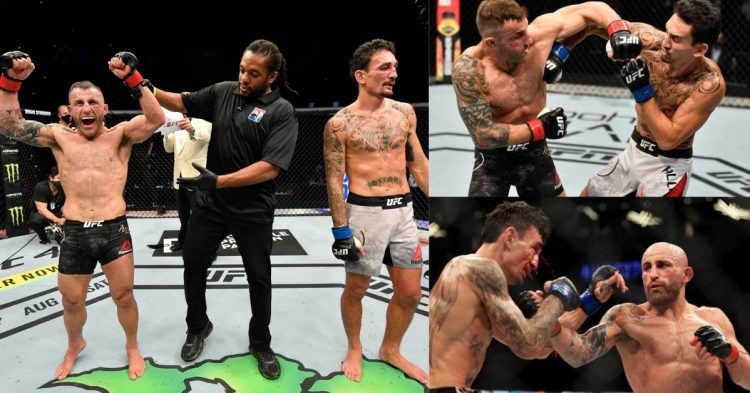 Alexander Volkanovski successfully defended his featherweight title against Max Holloway in yesterday’s UFC 276 co-main event bout that took place at the T-Mobile Arena in Las Vegas. The Great crossed paths against Blessed for the third time and consequently, fans were expecting a war after their first two fights were filled with nerve-wracking moments.

In both those fights Volkanovski emerged victorious but several fans and critics online raised question marks on the judging of the rematch as they claimed Holloway had done enough to win that fight.

This time around Alexander Volkanovski left no doubts in the minds of any fight fans as he put on a striking masterclass and dominated Max Holloway from start to finish. In a recent interview on Submission Radio, Volkanovski’s coach Eugene Bareman made an appearance and discussed several topics with the two hosts.

During this episode, the interviewer asked Eugene about The Great’s gameplan that helped him outclass Max in this trilogy fight. Eugene Bareman gave a very surprising response saying that their plan was to move towards Max Holloway’s strong side.

This gameplan is quite risky considering Holloway’s striking skills. But this win shows Volkanovski’s discipline of sticking to the plan of his coaches which helped him outwork Holloway and win the trilogy.

After losing against Alexander Volkanovski at UFC 276, Max Holloway showered high praise on the featherweight champion on social media. The former champion lauded The Great’s dominance and declared him his choice as the best pound-for-pound fighter in the world.

I’m still up 2-0 on knockdowns for trilogy. Prob gonna need a 4th to settle this. 😂 Just playing. Congrats to my brother @alexvolkanovski . Go get that 55 strap. You earned the shot. You’re #1 P4P right now. pic.twitter.com/5lUNWZVbRA

The Blessed’s statement would come as a big surprise to many considering their epic rivalry. But there is an argument regarding the rankings after Volkanovski’s sheer dominance against Holloway who is pretty high in the pound-for-pound rankings.

Moreover, the Aussie featherweight champion has swept the division with his outstanding performances and it looks like there is no challenger left in the 145-pound roster that could pose a big threat to Volkanovski.

Consequently, The Great is eyeing to move up a weight class and compete for the lightweight title. It he manages to succeed in winning a second title then it would be safe to say that Volkanovski will become the P4P best fighter in the UFC.