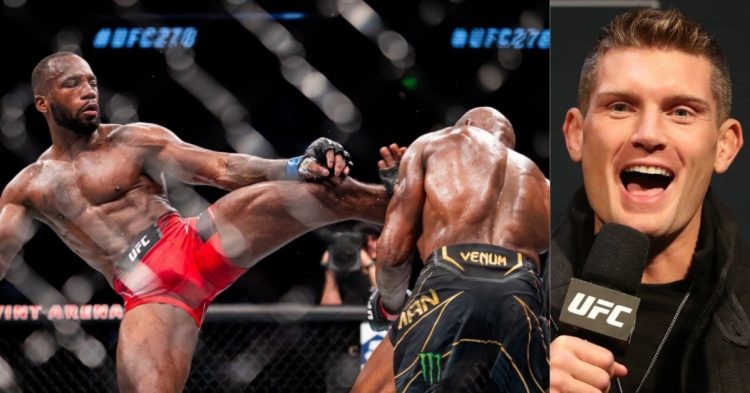 UFC fighters often predict the outcomes of their own fights correctly. Some pundits may also successfully predict how an upcoming fight may play out. But, former UFC welterweight title contender Stephen Thompson predicted the outcome of Kamaru Usman vs Leon Edwards almost a year in advance!

At UFC 268, former UFC welterweight champ, Kamaru Usman, rematched Colby Covington. Their first fight at UFC 245 was an instant classic and UFC President Dana White labeled it as one of his favorite fights. So the expectations from the rematch were high and it delivered. Similar to their previous fight, Usman and Colby stood in front of each other and duked it out!

This is cool I had never seen this pic.twitter.com/jR9Jq1owgH

Stephen “Wonderboy” Thompson (16-6-1) was doing a live watch-along of the bout. While watching the fight, he also broke down the nitty-gritty of the contest. During one exchange in the fight, Thompson made an interesting observation. He noticed Usman’s habit of leaning his head sideways while dodging Colby’s punches. Wonderboy then stated that Leon Edwards will make Kamaru pay for it if he does not rectify it.

Sure enough, the outcome of UFC 278 proved Stephen Thompson right! Leon Edwards took advantage of Usman’s bad head movement and landed the famous kick which won him the bout with less than a minute left in the last round!

The veteran kickboxer will return to action in December against Kevin Holland (23-8). Thompson has lost 4 of his last 6 fights and is on a two-fight losing streak. Hence, he would be looking to get back to his former glory and make another run toward the top of the division.

Following his win, a lot of fans called Leon Edwards’ kick on Kamaru Usman lucky! The Nigerian Nightmare was dominating the bout until the point of the stoppage. So fans took the opportunity to call Leon’s kick a last-ditch measure. However, that was not the case at all and his team proved it!

After the bout, team Edwards released footage where they were seen practicing the exact same kick. Leon landed the kick on the pads over and over again. It ultimately paid dividends as the kick made him the welterweight champion of the world. The kick had more to do with Leon’s elite skills than any sort of luck. However, his chapter with Kamaru is not closed yet!

Rocky will look to defend his title for the first time next year, against Kamaru Usman. The bout is rumored to take place in Edwards’ home country, England. Usman is already in training camp to prepare for their third encounter. The champ is also hard at work. UFC’s 170lbs prospect, Ian Garry recently stated that Leon landed the same kick on him that KO’ed Usman. They apparently did some sparring sessions together.

Who do you think wins the trilogy between Kamaru Usman and Leon Edwards? Let us know in the comments down below.