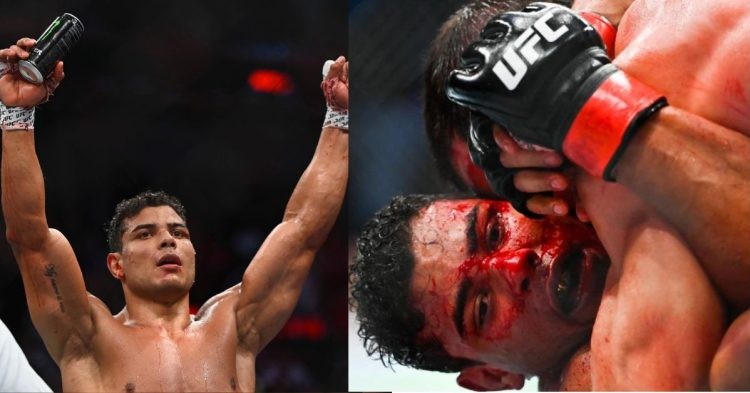 Paulo Costa has rebounded from his losing skid after defeating Luke Rockhold via unanimous decision in the co-main event of UFC 278.  Costa is now 14-2 after securing a decision win against the former champion Luke Rockhold but he was certainly not very happy following the event.

The Brazilian fighter took out his frustrations on his Instagram and pointed out his displeasure. Sharing some photos from his fight against Rockhold and Yoel Romero, Costa urged the UFC to implement the use of VAR or video assistant referee in the fights like in other sports. He wrote:

“I need to point out this very important thing. I’ve had enough of this shit and it’s time to rethink on @ufc and all MMA shows need to use VAR (video assistant referee) to stop this cheating and help referees take the rights decisions…This need to change asap.”

‘Borrachinha’ noticed that the referee allowed Luke to recover after taking body shots. Costa stated that he felt like Luke was faking a groin shot which allowed him to take a break from exhaustion. He also added slides from his fight against Romero where a similar thing happened.

Costa believes that the body shots knocked out both his opponents and had the referees allowed him to go for the finish; he would’ve won the fight via stoppages. However, the Brazilian fighter still won the fights on both occasions but he certainly could have gotten a TKO finish in these outings.

Paulo Costa vs. Luke Rockhold fight was bizarre but entertaining

Paulo Costa is back in his win column after three years since his back-to-back losses against Israel Adesanya and Marvin Vettori.

The co-main event of UFC 278 saw the return of Luke Rockhold in the last fight of his career. Though the fight itself was very entertaining, things took a bizarre turn in the middle of the fight.

While it is understandable of Luke gassing out mid-fight, Costa, being a top contender was too seemed to be running on fumes in the late rounds. The first fight was full of action, as we saw both men finding success on their feet with combinations and single strikes.

Proving everyone wrong, Luke held his ground, taking some heavy shots from Costa but returning with his own counters. However, at the end of Round 1, Rockhold was seen crouching down on the brink of exhaustion.

After the first round, it was clear that Rockhold was exhausted, but on a strange note, Costa was also having some difficulties keeping up with Luke. Paulo is known for his explosiveness and had faced Israel Adesanya in a title fight.

In the third round, things got even weirder when Costa was dominating the fight on the ground. Luke reversed position and came on top but seemed to purposefully smear his blood over Costa.

Rockhold gave his all in this fight and both men’s heart was on full display. After a hard-fought battle, Costa was named the winner and the fans witnessed an emotional Rockhold announcing his retirement from the sport.

After this fight, Paulo revivified his record and won a ‘Fight of the Night’ bonus. With a couple more wins, Costa might see himself getting the title shot soon.