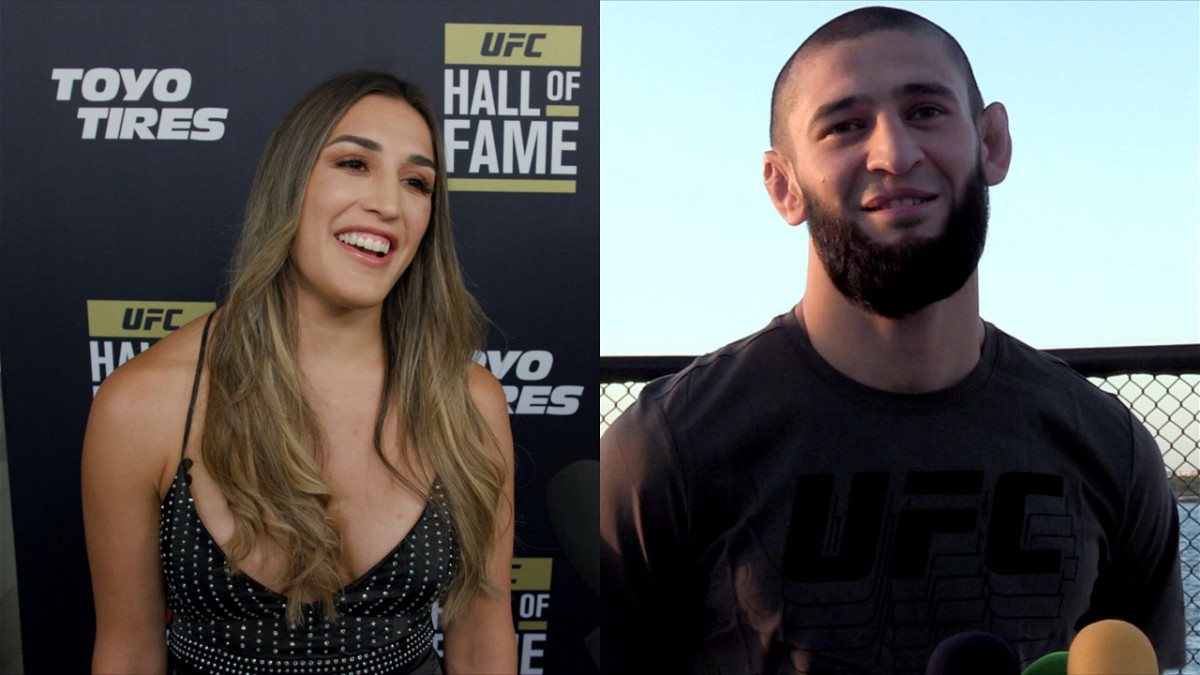 Khamzat Chimaev wanted to wrestle UFC Strawweight fighter, Tatiana Suarez, in the sauna leading up to his fight against Gilbert Burns this weekend!

The stigma around Mixed Martial Arts (MMA) fighters is that they are always serious and rude to everyone. However, UFC welterweight and middleweight fighter Khamzat Chimaev is here to prove it wrong. In recent times, his friendship with Darren Till has brought out his goofy side.

Not only Till, Chimaev apparently gets along with Tatiana Suarez as well. During an interview with Helen Yee, the UFC fighter shared a couple of hilarious stories of how Chimaev greets her.

Apparently, Khamzat playfully kicks Suarez on her shin whenever he sees her. Not only that, he even wanted to wrestle her in the middle of the sauna. Talking about the incident, Suarez said,

“Whenever he sees me at the PI, he just comes and kicks me like, shin to shin. I’m like ‘What are you doing?’ We don’t even have shin pads on. I’m like, ‘whatever, it’s okay.’ Real great friendship. The other day he was trying to wrestle me in the Sauna, I’m like ‘dude what is happening?’ I’m like ‘no, let’s not do this here.'”

All joking aside, Khamzat Chimaev probably has the most difficult challenge of his career so far coming up in a few days’ time at UFC 273. He will be fighting Gilbert Burns to become the no. 1 contender in the 170lbs weight class. Talking about the fight, Tatiana added,

“He’s a little nuts. But maybe that’s why he’s so good. But yeah, I’m very impressed by him and he’s a very big welterweight. Gilbert has a lot of power in his hands. I’m looking forward to seeing how well Khamzat deals with the forward pressure of Gilbert. Because Gilbert, he has strong striking.”

“And also he has good grappling. So I’m excited to see maybe a little bit more Khamzat grapple someone with really strong (grappling). I don’t know, I’m really excited about the match-up honestly.”

Although she hesitated to give any verdict on the fight, Suarez did point out that the size difference may be a big factor in determining the outcome of the fight. The 31-year old also claimed that Chimaev has the potential to become a double champ someday in the UFC.

Will Khamzat Chimaev Fall Prey to the Curse of Latino Rapper Anuel AA?

Golovkin vs Murata Live Streaming Details, How to Watch in the US and UK, Full Fight Card & More