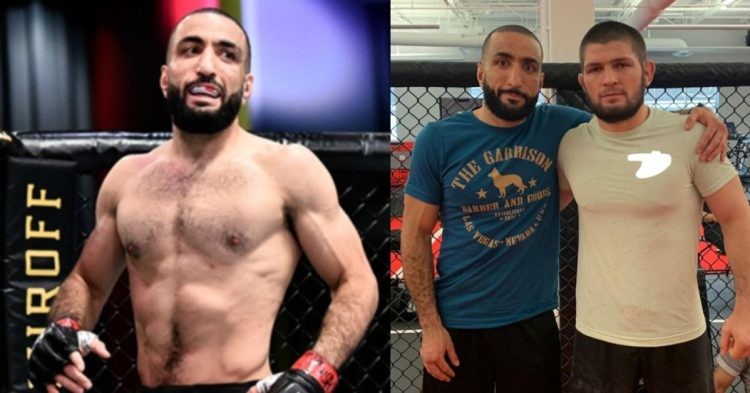 Belal Muhammad opens up on training with Khabib Nurmagomedov

In a recent episode of ‘Anatomy of a Fighter’, Muhammad detailed how training with Team Khabib made a positive impact on him. Belal also went on to discuss how training with fellow Muslims brought him closer to his religion.

According to Muhammad, the Russians are very selfless and simple and wanted nothing out of him, unlike in America. Nurmagomedov’s team genuinely helps a fighter without any motive behind it.

Talking about training with the team, Muhammad also discussed that it improved him spiritually, being able to pray shoulder-to-shoulder along with his Muslim brothers.

“The best thing I ever did, the best choice I ever made was coming down here and training with them. Not only for my martial arts but for my Islam, for my religion, just bringing me closer to it all. It’s been amazing.”

Watch the full episode below:

Muhammad is currently on an eight-fight unbeaten streak. He returns to action against the undefeated prospect Sean Brady who has a record of 15-0.

How did Khabib Nurmagomedov help Belal Muhammad For His Next Fight?

Belal Muhammad has trained with Nurmagodemov before. Last year, while preparing for his bout against the current welterweight champion Leon Edwards, ‘Remember The Name’ expressed his gratitude towards the former lightweight champ.

Muhammad was overwhelmed and was very excited to train with arguably, the best grappler in MMA. He spoke very highly about Nurmagomedov and referred to him as the ‘Michael Jordan of MMA’. Muhammad said:

“He’s such an icon, a huge mentor for any Muslim fighter, or if you’re a Muslim in general. Just to see the way he holds himself the whole way. The way that the whole world sees him as such a humble guy and he’s truly that even in person”.

“Khabib’s still in his prime. He’s not like he fell off or anything like that. He’s a beast and I got to roll with him, got to train with him, and got to get under his coaching,” Muhammad added.

However, his fight with Edwards was declared a ‘No Contest’ due to an accidental eye poke that prevented Muhammad from continuing.

Since retiring from MMA, Nurmagomedov has turned into a professional coach. After cementing his legacy in the sport, ‘the Eagle’ changed his career and started his own promotion, Eagle FC. But in addition to that, he has also helped coach many of his friends and family.

Muhammad has been training with Nurmagomedov’s camp for a while now and can be seen perfecting his techniques for his next bout. But he will also be sure to support Islam Makhachev for his title fight against Charles Oliveira event at the Etihad Arena on October 22.