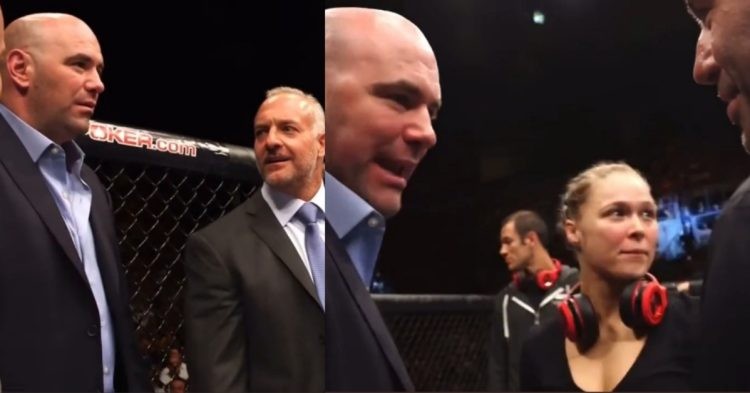 Dana White does not react well when things do not go according to his plan. Although he does not lose his temper as often in recent years, White was quite notorious for having a short fuse. In his late 30s and early 40s, Dana was a menace and fans enjoyed that side of the UFC President. In a recently surfaced video, fans had the opportunity to relive what Dana’s angry side looked like.

At UFC 175, Ronda Rousey took on Alexis Davis in the co-main event. At the time she was the UFC women’s bantamweight champion. She had 3 title defenses prior to that and was looking to complete her 4th successful title defense in a row. Rousey did it in style as she knocked out Davis within 16 seconds of the very first round. Afterward, Joe Rogan broke a piece of big news to her.

UFC 176, scheduled to take place on August 2nd, 2014, lost its main event between Jose Aldo and Chad Mendes. Because of the dominant nature of her win, Rogan asked whether Ronda could fill in as the main event of the upcoming PPV. But Dana, who was present in the Octagon with Lorenzo Fertitta, was left befuddled. It was evident that the company had other plans for her.

When Dana White raged at his production staff for trying to be matchmakers 😂 pic.twitter.com/RhdVXMTFJv

White immediately walked towards the fence and asked “hey, what the f**k are they doing?” Joe Rogan then clarified that producer, the late Bruce Connal, made him ask the question to Ronda. But an angry Dana White replied, “that’s the dumbest f**ing thing I’ve ever (heard). Tell them, tell them they are f**king idiots.” He also apologized to Ronda for the incident.

Dana White is famous for his angry rants

As fans know, The Fertitta brothers bought the UFC for only $2 million in 2001. After acquiring the company, their first course of action was to appoint Dana White as the President. White was the mastermind behind the Fertittas buying the UFC. Although he was quite tame in the initial days of his reign, Dana slowly but surely started showing his personality as the years went on.

The referees, the fighters, the coaches, and even the cutmen were subjects to some of Dana’s infamous rants. Referee Steve Mazzagatti perhaps got the worst out of White’s rants. Mazzagatti often let the fight go on for much longer than required. After a World Series of Fighting (now known as PFL) event in 2013, Dana slammed the ref and called him a “f***ing toolbox.”

Even the former UFC middleweight champ Israel Adesanya made a joke about Steve Mazzagatti’s late stoppages after the KO loss against Alex Pereira at UFC 281.

The 53-year-old also fell out with famous boxing and MMA cutman Stitch Duran. Dana did not hold back his thoughts about Duran in 2015 and his line “Stitch Duran was never my friend,” became an instant hit with the fans. The quote is used even in 2022! Every time Dana White has a fight with someone, the MMA community still uses the line to make fun of the situation.

In September 2021, Dana went on a huge rant about former boxer Oscar De La Hoya. Oscar alleged that UFC featherweight champ Alexander Volkanovski was underpaid after his highly entertaining bout against Brian Ortega. Dana was furious about that and shredded Oscar to pieces verbally. He even brought out documents to prove his statements.

But there are many famous Dana White moments that fans can easily find online. What is your favorite rant from the UFC President? Let us know in the comments down below.