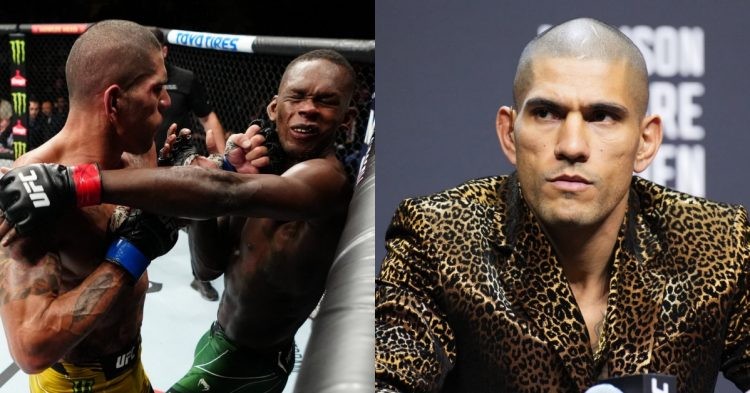 The UFC middleweight champ Alex Pereira is going through the best phase of his fighting career at the moment. He beat one of the best 185lbs fighters and the former UFC champ Israel Adesanya at UFC 281 to capture the belt. However, there is some controversy about the stoppage as many fans including Adesanya himself thought it was too soon. But Alex has a different take on it.

Although he was the Glory double champ, winning the UFC title is perhaps the best achievement of his career. Hence, he is upset about all the chatter of an early stoppage. It is clearly bothering him as he posted a clip of his conversation with Adesanya immediately after the bout. In the caption, Poatan asked the Kiwi fighter to take responsibility for the loss instead of complaining.

“Adesanya stop making excuses saying that the referee stopped the fight early… you have to thank him for saving your life. The way you were with your head down looking at the ground, I only needed one or two more hits to connect a good knee to your face so we wouldn’t know the outcome. As I said at that point in the video, you were a great opponent and I respect you for that. Assume the mistakes along with your team without taking away my merits. You will have one more chance! You’re next!”

To Pereira’s point, Adesanya looked like he was out on his feet when the ref stopped the fight. Alex did not look like he was going to stop raining down punches and he perhaps could have landed a big knee as he suggested.

It is definitely true that Israel Adesanya was unhappy about the stoppage immediately after the ref waived the fight. But Adesanya withdrew his statement in the post-fight press conference. The Last Stylebender added that he came to terms with the stoppage after consulting with his team backstage. But Pereira does not want to leave any doubts about the win and wants to give Adesanya the instant rematch.

When will the rematch between Alex Pereira and Israel Adesanya take place?

Despite his harsh words, the message from Alex Pereira was not all about hatred. There was a lot of respect for Israel Adesanya as an opponent. In the clip, both Pereira and Adesanya seemed to share some words of admiration for each other. Even Adesanya later gave props to Alex for his win. But the way the fight ended, left a lot to be desired.

The 33-year-old was up by 3 rounds to 1 at the beginning of the 5th round. So Israel more than had his fair share of big moments in the contest. Aside from rocking Poatan at the end of round 1, Izzy also controlled him on the ground in round 3. So a rematch between the two will be highly anticipated by the fans. Hence, the question becomes, when will the fight occur?

Fans assumed that Adesanya will get an instant rematch. Alex’s latest Instagram post just confirms it officially. However, fans should not expect to see the bout any time in the near future. Talking to journalists after the bout, Adesanya expressed his wish to take a break after such a grueling schedule. He fought 3 times in 2022, within a period of 8 months. So he definitely needs a break.

“People always make fun of me about you know my chest and other things. But they don’t know what I’m doing or what I’m going through in life. But I just keep everything in the back burner. So I just got somethings to fix first, and yeah, I’ll be back.”

He also hinted towards treating some pre-existing injuries. Izzy is also serving an indefinite medical suspension after a grueling fight against one of the most powerful strikers in the sport. So it does not look like he will return to fighting very soon.