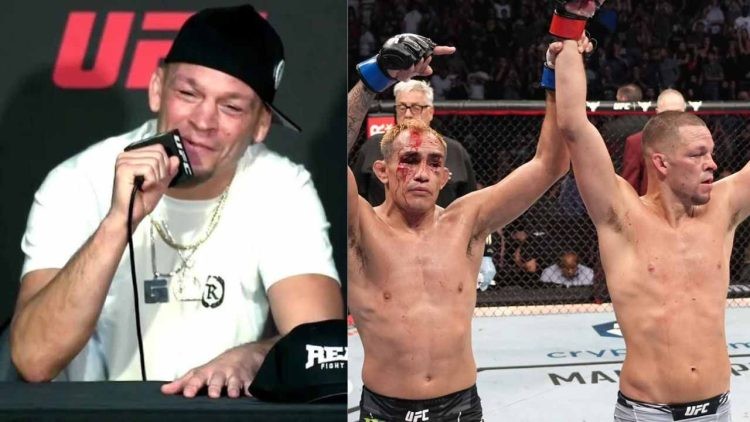 Tony Ferguson has been around in this sport for what seems like forever. After winning the Ultimate Fighter 13, Tony took the UFC by storm. Over the years, El Cucuy has put on some exemplary performances during his prime.

Tony has had an illustrious career, beating some big names in the UFC and having some amazing highlight moments. Hence, his unbeaten 12-fight run and reputation as one of the best Lightweights are already set. As such, he’s gained the respect of mainstays like Nate Diaz, who had nothing but praises for him.

Speaking in the post-fight conference, Nate gave his thoughts on Tony. More specifically, what he feels about people that are doubting El Cucuy. “People can act however the hell they want if they done sh*t like that. People are like, that person’s crazy, I’m like that’s crazy. He put on enough wars to do whatever the f*ck he wants. ….that guy should be a hundred millionaire.”

Whilst it is clear that Nate has nothing but respect for Tony, he also (unintentionally ) raised an important issue. To be more precise, the highly debated and controversial issue of fighter pay. Fighter pay has been a subject of great controversy for Dana White and the UFC, especially after news came out that ring girls were reportedly making more than some fighters.

Now, the matter will be further highlighted after reports have emerged that Hasbulla has apparently secured a 5-year contract with the UFC. The alarming part, however, is that will get more money than UFC Fighters for attending UFC Events and press conferences.

Although there have been no official reports of the fighter payouts, we can estimate a fighter’s salary by their previous earnings. As such, it is reported that Tony Ferguson pocketed $616,000 for his UFC 279 performance. This brings Tony’s all-time earnings from the UFC to a reported $4.2 million.

However, having taken a significant amount of damage over the years, questions need to be asked if Ferguson has been reimbursed adequately for his efforts. Prior to this fight, Tony suffered a brutal front kick KO to Michael Chandler and then heavy punishment before that from the likes of Dariush, Gaethje, and Oliveira.

Years of sustaining heavy amounts of damage have begun taking their toll on El Cucuy. Can Tony still compete or even win another fight? When will Tony finally throw in the hat? Only time will tell.