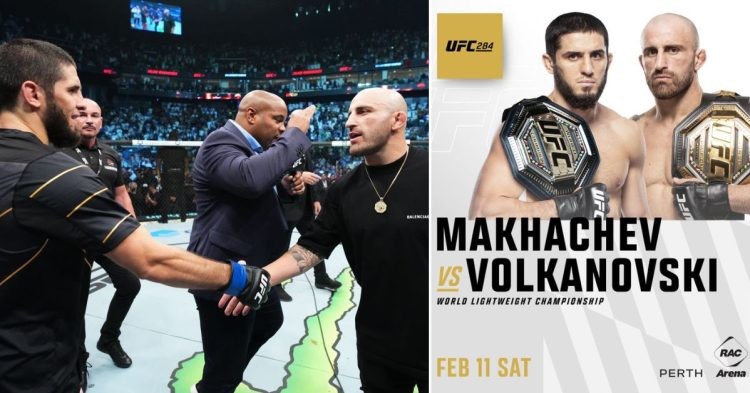 What a time to announce arguably one of the biggest fights of 2023 as UFC put the official tag on Islam Makhachev vs Alexander Volkanovski at UFC 284 in Perth, Australia. Just hours away from UFC 281 inside Madison Square Garden, UFC surprised fans with the announcement.

Earlier, there were reports that UFC could be moving past Makhachev vs Volkanovski after a tweet from the Dagestani fighter that pointed towards a change of plans. There was a chance that the UFC was waiting to see the winner between Dustin Poirier and Michael Chandler to determine the next challenger for Islam Makhachev. However, with the official announcement, it has put all those rumors to rest.

Check out some wild reactions to UFC 284: Islam Makhachev vs Alexander Volkanovski.

Damnnn! Not ready for this belter 🥵 Let’s go Volkk

Islam Makhachev is active asf, most likely 3 title defenses by 2023!

Islam Makhachev will take on Featherweight Champion in a Champion vs Champion fight for the #1 P4P spot in the main event of UFC 284 as the promotion returns to Perth, Australia. Fans were left in disbelief after the announcement took the MMA community by surprise.

The last time the Featherweight Champion moved up to the lightweight division to fight for the title was when Conor McGregor took on Eddie Alvarez back at UFC 205 after winning the featherweight gold against Jose Aldo. The irony is, the official announcement for UFC 284 coincides with the date that Conor McGregor defeated Eddie Alvarez to become a two-division champion six years ago.

Alexander Volkanovski will look to become a two-division Champion in what promises to be a headliner of epic proportions at UFC 284. Earlier, UFC President Dana White had confirmed in the leadup to UFC 280: Charles Oliveira vs Islam Makhachev that Volkannovski was next for the title shot.

Islam Makhachev further promoted the fight by calling the featherweight champion out after submitting Charles Oliveira which saw him become the new UFC Lightweight Champion. Volkanovski and Makhachev are both ranked #1 and #2 in the UFC’s Pound for Pound rankings. Who do you think gets his hands raised when it all goes down on February 12 inside RAC Arena, Perth, Australia?