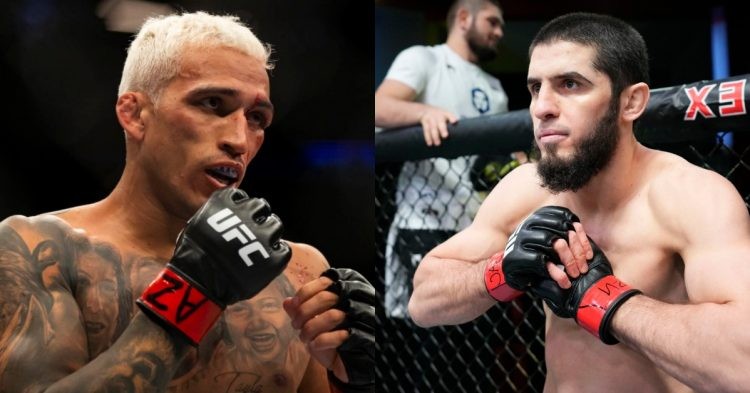 Former lightweight champion Charles Oliveira will face Islam Makhachev at UFC 280 for the vacant lightweight title in Abu Dhabi. The magnitude of the fight gained a lot of controversies the week after it was announced the fight.

Former lightweight champion Rafael dos Anjos expressed his views and brought up some of the issues behind this bout. He appeared in a podcast hosted by Fabricio Werdum and discussed the tractions behind the title fight.

“I think it’s a tough fight. I think one thing that favors Islam is the fact that the fight is in Abu Dhabi,” Rafael said.

One of the most talked about subjects around this fight was the location of this main event. As a legitimate champion, Charles deserved to fight for the title in his territory, Brazil.

However, instead of Brazil or United States, they decided to make the fight in Abu Dhabi, which would hugely favor Makhachev for the support he’d get from the Muslim fans. Dos Anjos also talked about his fellow Brazilian being played with an unfair hand:

“That wasn’t nice with Charles. I think as a champion, he deserved a fight on neutral territory in the US, or in Brazil, right?” [Translation via Brazilian MMA Fighters on YouTube]

However, as Oliveira lost the title, he had no ground to make any amends regarding the location of the fight. Dos Anjos also clarified the fact that Oliveira could not make the weight and as a result lost the belt.

So, despite being the former champ he had no leverage to negotiate with but had the only choice to accept the fight or he’d have lost the title shot to someone else.

Charles Oliveira and Islam Makhachev will be headlining the main event of UFC 280 which will take place at the Etihad Arena in Abu Dhabi.

‘do Bronx’ won the vacant UFC lightweight title via a second-round TKO win over Michael Chandler at UFC 262 in May 2021. He had one successful title defense against Dustin Poirier at UFC 269 in December 2021 and was set to defend the title against Justin Gaethje at UFC 274.

However, before the bout, Oliveira failed to make weight and as a result, he was stripped of the title. Gaethje had the opportunity to become the new champion but he was stopped by Oliveira via first-round submission.

Charles is riding on an 11-fight winning streak with victories over Tony Ferguson, Chandler, Poirier, and Gaethje. This winning run has established the Brazilian as the best in the lightweight division following the retirement of Khabib Nurmagomedov.

On the other hand, Makhachev has won 10 fights in a row and coming off a first-round TKO win over Bobby Green at UFC Fight Night 202 in February.

UFC 280 will feature two of the best lightweights with both of the contenders having long win streaks. Both Charles and Islam are elite grapplers, one with the best BJJ skill and another being the toughest wrestler.

Apart from their superior ground skills, both of them have knockout powers and are very good on their feet. This fight will be easily one of the best main events of this year.