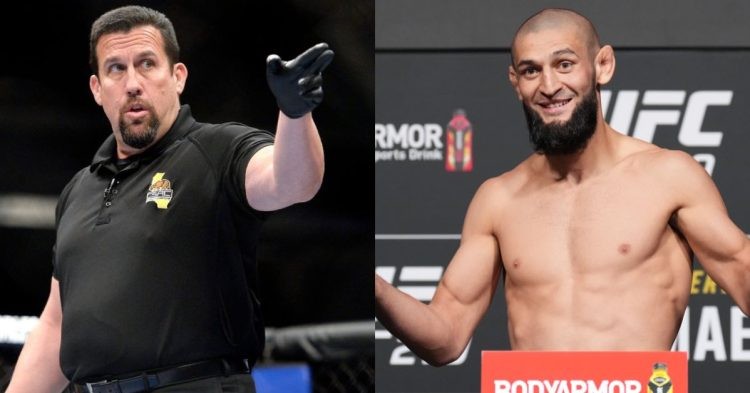 The entire world was shocked after Khamzat Chimaev missed weight by a whooping margin of 7.5 lbs ahead of his main event fight against Nate Diaz at UFC 279. After being unable to make weight, several fighters, fans and analysts criticized The Borz and called him unprofessional.

After defeating Kevin Holland in the co-main event, Chimaev revealed in his post-fight interview that one of the doctors told him to stop cutting weight due to medical reasons.

However, former UFC referee John McCarthy disagreed with Khamzat’s comments and slammed The Borz for blaming the doctor for his weight miss. McCarthy explained in detail during his podcast why the doctor stopped Khamzat from cutting weight.

“Because he knows that Chimaev is dehydrated already. What does the doctor say? Now keep on going until you know possibly make the weight or you possibly end up in the hospital. Of course, he’s going to tell him stop.”

In the end, It is unclear what was the exact reason behind Khamzat missing weight ahead of the biggest fight of his career. This is not the first time that Khamzat Chimaev has been in trouble with the weight cut as he almost missed weight ahead of his bout against Gilbert Burns.

After Chimaev’s fight against Nate Diaz got cancelled due to him missing weight, the UFC booked a matchup between Khamzat Chimaev and Kevin Holland for the co-main event of UFC 279. Everyone was hoping for an exciting matchup as there was a lot of bad blood between the two fighters.

However, The Borz didn’t allow Kevin Holland to land a single strike as he straightaway went in for a takedown and controlled him on the ground. Thereafter Chimaev locked in the d’carce and finished Holland in the second minute of the first round.

It was an impressive performance by Khamzat and he backed his talk and put on a show despite all the drama in the build-up of the fight. With this win, The Swedish welterweight is just a few fights away from a title shot. It would be interesting to see who he squares off inside the octagon next.